The contract has been signed, so I can now reveal that!

Barnburner and Gunshy, two cozy mysteries set in Maine written by Sharon Lee, will soon be available as audiobooks, produced by Tantor Media.

Barnburner and Gunshy were first published by SRM Publisher LTD in 2002 and 2006, respectively.  Barnburner was also published as an ebook by Embiid, in 2002.

Both books are available as ebooks, from the Usual Suspects, and as paper books from Amazon.  They concern the adventures of one Jennifer Pierce, a native of Baltimore, who has inherited her aunt’s house in Wimsy, Maine.

Sharon Lee introduces us to Wimsy, Maine…a world built with the same attention to character, story, and setting that we have long expected in the Liaden Universe® books.  Like all her books, this one is a keeper…  — Modean Moon, author of RWA RITA Award winner The Covenant

Second! as part of the three-novel compilation, Partners in Necessity, in February 2000, cover art by Michael Herring.

Third! as a mass market from Ace Books, in February 2003, cover art by Michael Herring.

Fourth! as part of two-novel compilation, The Agent Gambit, from Baen Books, in January 2011, cover art by Alan Pollack.

So! Let’s raise a glass to Carpe Diem!

On a related note — today’s publication of Carpe Diem means that the First Three Books, which is All The Liaden there was for seven-or-ten years (depending on if Steve’s counting or I am) are all in print in the same format, and in stores, now. So this is the perfect time to do needy friends a favor and introduce them to Val Con, Miri, Edger, Shan, Priscilla, Mrs. Trelu, Hakan, Kem, and all the rest of the people who live in: Agent of Change, Conflict of Honors, and Carpe Diem.

Eeeh-HAH, Book Day! Always exciting. Even after so many years.

Asyouknowbob, The Gate that Locks the Tree: Adventures in the Liaden Universe® No. 30, by Sharon Lee and Steve Miller, will be published as an electronic chapbook on Wednesday, February 19. It is now available for preorder at most of the Usual Suspects.  On Wednesday, it will also be available for purchase and download from Baen.

Now! the Original Plan had called for the paper edition, made available through Amazon, would be available for purchase before or on the electronic publication date.  Sadly, there have been several third party adjustments made in the tools I had been using to produce the paper chapbooks, which means that we have invoked Plan B.  I am at this moment awaiting a paper proof copy from Amazon, which will come into my hands on Thursday, February 20.  If all is well, I will push the button at Amazon, and paper books will flow.  If all is not well, I will report back here, so, yanno — watch the skies.

In the meantime, a new splinter — “Shan’s getting married” — with author comments, has been published to Splinter Universe.  Here’s your link.

Looking ahead just a week, I’ll mention that the anniversary mass market paperback edition of Carpe Diem — the third Liaden book ever published — will be go on sale at All The Bookstores on February 25.

And that’s the news that’s fit to print.

Everybody have a good day.

The ebook edition of That Gate that Locks the Tree: Adventures in the Liaden Universe® Number 30, by Sharon Lee and Steve Miller, is now available for preorder from:

The ebook edition will be released on Wednesday, February 19.  At that time, it will also be available from Baen.com.

The paper edition is delayed.  I apologize, but we have some quality control concerns which made it necessary for me to order in a paper proof, rather than relying on an electronic proof.

The Gate that Locks the Tree is an original, never-before-seen Liaden Universe® novella.

Those who have been with us for a while will recall that, back in 2012, Steve and I pitched five books to Madame at Baen, the so-called Five Book Dash.

Well, in the Way of Things Lee and Miller, the Five Book Dash became a Six Book Dash, and just yesterday, we got the cover art for the sixth book — Trader’s Leap — in the mail.

All art by David Mattingly. 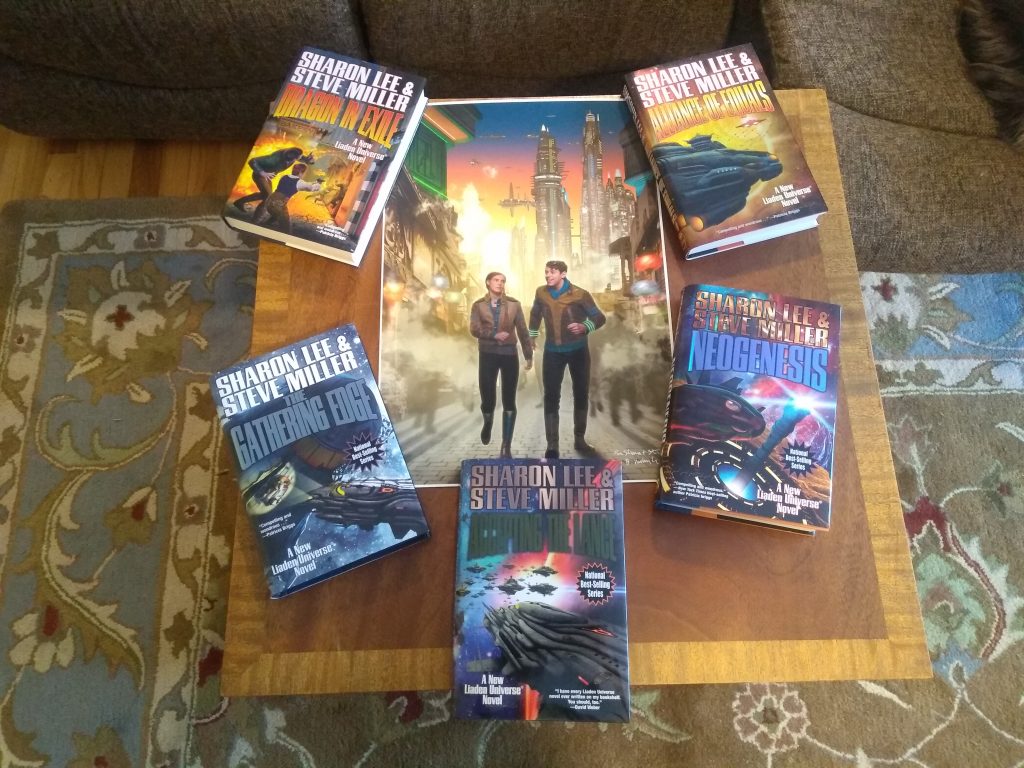 Bookscan reports that Lee and Miller’s Accepting the Lance, the 22nd novel set in their Liaden Universe®, debuted on its bestseller list at the Number Three position, behind  Dead Astronauts, by Jeff Vandermeer; and Rebecca Roanhorse’s Star Wars novel, Resistance Reborn.

Lee and Miller extend their thanks to all Liaden Universe® readers — give yourselves a hand!

Those who have been waiting (so very patiently) for the Audible edition of ACCEPTING THE LANCE, here’s your link.

Tomorrow, December 3, is Book Day for Accepting the Lance by Sharon Lee and Steve Miller!

Exiled from Liad after bombing a city to save it from The Department of the Interior’s infernal weapons and plans, Clan Korval has gone to ground on the back water planet Surebleak, whose people are as untamed as its weather.

Far beyond the surface of frigid Surebleak, Korval’s far-flung trade network needs a serious reset. From flagship Dutiful Passage to the experimental self-aware Bechimo, the clan’s ships are prowling space lanes seeking trade. Meanwhile, old tech from a failed universe and the machinations of the mysterious Uncle are coalescing into dangerous opportunity or nefarious trap.

And the Department of the Interior is not done with Clan Korval yet. They seek a final fully reckoned revenge, with Surebleak and Korval’s ships and people everywhere in the crosshairs.

About Accepting the Lance:

“Accepting the Lance is a tour de force! So many threads woven, so many pieces moved on the board, old and new friends met, this book is an extraordinary installment in a brilliant series. I stayed up till 3 a.m. reading it and I have zero regrets. An incredible ride of a book!”—Nalini Singh

Brand new Liaden Universe® story “A Visit to the Galaxy Ballroom,” by Sharon Lee and Steve Miller is now live on Baen.com (scroll down to the story).

The story is free-to-read, and will be available until roughly mid-December.

For those who wish to know, Lee and Miller, Lee, and Miller have published the following original works in 2019.  They are all eligible for Nebula and Best of Year nominations.