This morning is cool, but So Very Sunny.  My office, the repurposed sun room, is Awash, and there are three coon cats scattered among the various puddles of warm, soaking it all in.

I am at the desk, fighting sleep-rays with More! Tea! and wearing my Sun Goddess cap so that I can see the computer screen.  This is not to be understood as a complaint.  I would much rather the sunshine than not.

This morning’s check-in at Amazon reveals that pre-orders for The Wrong Lance now stands at 455, the most pre-orders for any Pinbeam Book since the mind-blowing 693 for Degrees of Separation, back in January 2018.

Which discovery led me to the realization that we are just entering a Lee-and-Miller Busy Season.  Let me just summarize what’s coming down the road for y’all from now ’til the end of the year.

Of course you all know this, but it bears repeating for the Guy in the Back:  You can pre-order signed (but not personalized) copies of Trader’s Leap from Uncle Hugo’s right now.  Here’s your link.

If you can’t wait for the December publication of  the hardcover/ebook, you may purchase the Trader’s Leap eARC right now from Baen.  You may also read the first nineteen chapters here.

But wait, there’s more!  Let’s do this chronologically.

October 27:  Release Day for  Accepting the Lance mmp AND The Wrong Lance

December 2:  Lee and Miller will read and talk, virtually, from Mysterious Galaxy Bookstore. There will be giveaways! The event is scheduled for 7 pm PACIFIC Time, so check your watches.  ALSO, you will need to set up an account at Crowdcast ahead of time in order to attend.  More information here.

And that gets us through the end of the year.

___________
*YES, there will be an ebook edition of Trader’s Leap.  No, you can’t pre-order it.  This is how it always is with Baen ebooks, because they offer eARCs.  No, there is nothing the authors can do about.  I DON’T KNOW if there will be an audiobook edition of Trader’s Leap.  I have inquired at Baen and have yet to receive a reply.  As soon as I have an answer, I’ll post.

There was a database catastrophe at our web hosting facility, which brought down sharonleewriter.com, splinteruniverse.com, and pinbeambooks.com for a few days.  We are back now, and in catch-up mode.

1  The Wrong Lance, Splinter Universe Presents, Volume 2 has been compiled into an ebook and is available for preorder from The Usual Suspects.  Here’s a so-called “universal” link.  Here’s the link for the Kindle edition.

1a  YES, the ebook will be available from Baen, but not until Release Day.  Baen does not have the ability to take pre-orders for Pinbeam Books (the Lee&Miller Publishing Arm)

1b  YES, there will be a paper book, but not until (or a little before or after).  Amazon is our source for paper books, and Amazon has not so far been able to figure out how to allow people to pre-order paper books

1c  If you want to talk about The Wrong Lance with other readers, a discussion area has been created for you, here

2  The eARC of Trader’s Leap, the 23rd novel in the Liaden Universe® created and authored by Sharon Lee and Steve Miller is now available for download.  Here’s your link

2a  If you’d like to read a sample of Trader’s Leap, that starts here

3  You may preorder a signed (not personalized) copy of the Trader’s Leap hardcover from Uncle Hugo’s SF Bookstore.  Here’s your link

3a  For those who have not heard the news, Uncles Hugo and Edgar were lost to the Minneapolis riots.  The owner, Mr. Blyly (aka the Uncle), wished to make signed books available to long-time customers and Liaden Universe® readers.  The only way this could be made to work was for Baen to have the printer send Steve and me pages for us to sign.  These pages will be bound into a set of books and sent to Mr. Blyly.  This process of binding in a special page is in the industry called “tipped in,” which technical description you will see on the catalog page linked above.

3b  Trader’s Leap hardcover may also, of course, be preordered from your favorite bookstore, whatever it is.

3c  You may not preorder the ebook edition of Trader’s Leap from your favorite bookstore as yet.  This is because of how Baen markets its bundles and eARCS and that’s all I know on the subject.

3d  There is no word yet on an audio edition.

4  If you have read the Trader’s Leap eARC and Want To Talk About It, a Spoiler Discussion space has been set up here

2  Proof The Wrong Lance ebook, collate it, and get it up for pre-order

2a  Take The Wrong Lance down from Patreon and Splinter Universe. September 12

5  Write short story to make the pair with “Galaxy Ballroom” for Adventures in the Liaden Universe® Number, um…31? (eek!)  November 15

6  Decide if I’m Actually Going to Write another Archers Beach novel, or if I can scratch that itch by writing two novellas, instead.  Realsoonnow

The really annoying thing is?  I feel like I’m missing something.

Today’s blog title brought to you by The Talking Heads: The Road to Nowhere

It’s been a while since we last talked, and rightly may you ask “What on earth has the woman been doing?”

I finished with the Trader’s Leap copy edits, and returned them to M’sieur the Editor, who has passed them on to the typesetter.  Which, yes, means that there is possibly an eArc in your Nearish Future. 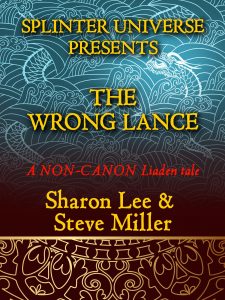 We expect to release this concurrently with the mass market edition of Accepting the Lance, on October 22.

Oh, what else?  Ah!  I moderated a panel at reCONvene on August 15, marking my first time as a moderator and a panelist at a virtual convention.  I had fun!  My panelists — Steven Barnes, Jenn Brissett, Br Guy Consolmagno, and Adrian Tchaikovsky — were brilliant and I’d do it again in a heartbeat, which!

Happens to be a good thing, because Steve and I will be participating in AlbaCon in the Afternoon on Sunday, August 30 — which is coming right up!  Other attendees are the writing team of Debra Doyle and James D. Macdonald.  Steve and I will be reading — a bit from Trader’s Leap and another bit from a recent chapbook to be named later.  More information will be forthcoming as we have it.

Other than those two events, we’re staying pretty quiet, and healing from the Compleat Disruption of Everything which has been the last 19 months of our lives.  We’ve been reading a lot, as you can see from the lists I’ve been posting; taking advantage of the local Farm Pick Up for fresh fruits, veggies, meats, and cheeses, taking long country rides and visiting some of the little parks with which Maine is liberally sprinkled.  We depend on InstaCart for our grocery shopping, and I’m kind of pleased at the fall-off in necessary doctor visits.

On that front, I have do still have one more medical appointment — this Wednesday — before taking up the new aromatase inhibitor (the first having, um, invoked Unwanted Side Effects), and Seeing What Happens.  In the meanwhile, I have two pounds more to lose to hit the first 10 pounds my oncologist wants me to lose.  This is a two-part process:  first hit and maintain at 178 pounds, then move on to maintaining 170.

Yes, I have changed my diet, and it wasn’t really a hardship, since the “plant based” diet isn’t so very much different from what we’d been doing, anyway.  Basically, it’s less bacon, more fish, and lots more veggies, but — I like veggies.

I’m also slowly getting back to something resembling exercise, though — I never thought I’d say this — I miss the gym.  There you have it, though, I do miss the gym — almost as much as I miss going to the ocean.

Fans of the cats will wish to know that Belle has been feeling a little poorly.  The cause appears to be her calcium levels, and she is now on a weekly, very low dose of Fosamax, of all things.  She’ll have another blood draw in three to four weeks to see if this therapy is succeeding.

. . .I think that catches us up.  I will try to do better about updates, now that life has settled somewhat, if not exactly returned to normal.  Mostly, we’ll be writing, reading and cat herding here in Central Maine — which, come to think of it, is our normal.

Here’s a picture of Steve and me at Swan Lake State Park, in Swanville Maine. 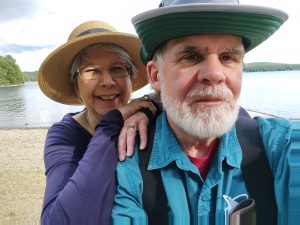 A quick overview of the author’s side of the process, and that wraps up this sweet halcyon time together.  I hope you had as much fun as I did.

Filing under What I Tell You Three Times is True:

The Wrong Lance Project is now completed.  The chapters will remain on Splinter Universe and on Patreon through September 11.  After that date, the chapters will be taken down and gathered into the second Splinter Universe Presents chapbook.  The plan is to make the chapbook available on October 27, concurrent with the mass market paperback release of Accepting the Lance, aka The Right Lance.

And here!  Is the link to the Author’s Afterword

The last chapter of The Wrong Lance has posted and is waiting for you to read it.

Repeating:  This IS the final chapter of The Wrong Lance.  Next Monday, August 17, I will post an Afterword/Author’s Wrap Up.

And!  Here’s your link to Chapter Eleven

Chapter Ten of The Wrong Lance is now ready for your perusal.

Next week — August 10 — Chapter Eleven, aka the Place Where it Died, will make its appearance; and the week after will see the publication of the Author’s Afterword.

Once this has happened, the files will remain on Splinter Universe and on Patreon through September 11.  After that date, the chapters   will be taken down and gathered into the second Splinter Universe Presents chapbook.  The plan is to make the chapbook available on October 27, concurrent with the mass market paperback release of Accepting the Lance, aka The Right Lance.

The Wrong Lance, Chapter Nine is up and hoping that you’ll read it.

Chapter Eight of The Wrong Lance is up and ready for you to read.

Remember, if you would like to talk to other readers of TWL, there is a discussion area, here.

Here’s the link to Chapter Eight!

For those who want to Talk About It, a Spoiler Discussion Group has been created at Splinter Universe. Those who DO NOT want to talk about — just ignore this post.
OK! SPOILER DISCUSSION LINK