The Big News around here is that I have completed seven — SEVEN! — sessions of Ray Gun Therapy.  Only 18 more to go.

I had hoped to get some work done this weekend, and may actually get there yet, but first — the Command Chair, because, despite having gone to bed early and gotten up late — I could use a nap.  Trooper is promoting this heavily, having pushed into my lap as I was typing this short correspondence, and banging my chin repeatedly with the top of his head.

In more interesting news, I recorded three chapters from Mouse and Dragon that constitute one of my favorite scenes in the Liaden Universe® and they are being posted on Patreon, first for patrons, then, when the next chapter posts, the previous one is made available for All the World.

This means that Chapter Thirty is free for you — yes, you! — to listen to, right now, right here

As reported earlier, I DARE t-shirts are being mailed, so — watch the skies!

I’ve been working, very slowly, on an Archers Beach story.  Steve is working on the next Liaden novel, the deadline for which has been put back to mid-summer.

I do think that’s all the news that’s fit to print.  I hope y’all are keeping safe and healthy.

I have embarked upon a Project.

Over the next few days, I will be taking down the older — pre-2020 — Splinters from Splinter Universe.  These will be collected in an ebook (possibly print) volume tentatively entitled: Splinter Universe Presents! — so that they will not be Lost Forever.

This redesign will give us room to start posting a Very Long Splinter, which we’ve been thinking about posting for A While Now.

Lately here at the Cat Farm and Confusion Factory, we’ve been doing a lot of waiting for phone calls of all sorts, and trying to fit cat physicals and shots in-between trips to Bangor.

Yesterday, I took a break from waiting for phone calls (have I mentioned recently How Very Much I hate phones, talking on phones, and waiting for someone to call me so I can talk to them on the phone?), to do errands in town, and to drive  out to Skowhegan to the Maine Grain Alliance, aka, the Grist Mill, to pick up some flour.  It was a nice drive, in that it was a sunny, warm day, and Route 201 is in pretty good shape, surface-wise.  I had Sirius XM Classic Vinyl station on, and had a fine run of music as I zipped up the road.

Unfortunately, it’s either Mud Season or Pre-Mud and Maine is as ugly as it ever is, with black snow melting into black dirt, dead grass and broken trees all too easy to see, so I can’t say it was  a scenic drive, but, still, very nice to get out of the house.

At the Grist Mill I bought a sack of sifted wheat flour and another of Red Fife.  I’d hoped for white whole wheat, forgetting that the mill prides itself on its heritage flours.  I’m told that Red Fife is an excellent bread flour, and the sifted whole wheat the closest they had to white.  Since I was out of flour entirely (which Will Not Do), I took my sacks away with me, picked up a Maine Root root beer at the cafe next door, and drove back to Waterville, much refreshed in spirit, and singing along with the radio.

This morning, we have contractors coming to look at the deck.  Indeed, one has already been and gone, and we await — ahem — a phone call from a second, letting us know that he’s incoming.

The cats have settled down after the excitement of Contractor One’s visit.  Trooper is in his box on the edge of my desk, Sprite is lounging in the open area between my office and the dining room, and I believe Belle may be supervising Steve.

Steve continues his labors on the next Liaden book, featuring the on-going adventures of Jethri Gobelyn.  I’m working on more mundane projects — like having to make a phone call to the plumber about his overdue quote — while the back brain chews over some story stuff I need answers to. . .

Second! as part of the three-novel compilation, Partners in Necessity, in February 2000, cover art by Michael Herring.

Third! as a mass market from Ace Books, in February 2003, cover art by Michael Herring.

Fourth! as part of two-novel compilation, The Agent Gambit, from Baen Books, in January 2011, cover art by Alan Pollack.

So! Let’s raise a glass to Carpe Diem!

On a related note — today’s publication of Carpe Diem means that the First Three Books, which is All The Liaden there was for seven-or-ten years (depending on if Steve’s counting or I am) are all in print in the same format, and in stores, now. So this is the perfect time to do needy friends a favor and introduce them to Val Con, Miri, Edger, Shan, Priscilla, Mrs. Trelu, Hakan, Kem, and all the rest of the people who live in: Agent of Change, Conflict of Honors, and Carpe Diem.

Eeeh-HAH, Book Day! Always exciting. Even after so many years.

So, suddenly and with only a little bit of warning — we’re busy.

Steve was already busy.  Being lead on a novel comes with an “I’m busy” card.  Plus, he’s already recorded a short story for Patreon.  Here’s the link.

Me, though, I had a couple things on my plate — getting the taxes ready for the accountant, a short story that may come under contract a little further down the line, that Archers Beach universe story I’ve been thinking about, the next novel after Steve’s got done with his two.  Also, I’d been thinking about another Liaden story or two, for inclusion in a new chapbook.  So — work, but not a lot of work.

And then?  I started going through the “cope with this after you’ve healed” folder on my desk, and I discovered that I had some splinters for eventual posting on Splinter Universe (there’s one up now, with author commentary, at this link).

The rest of the splinters in hand are Liaden in nature, and the plan is to get them up in a more-or-less leisurely manner.  First, I have to do something about the color scheme at Splinter Universe.

Then, Steve had finished drafting a story that Would Not Be Quiet just before my foot got rebuilt, and I put it aside to read until I was back on both feet.  That story — “The Gate that Locks the Tree In: A Minor Melant’i Play for Snow Season” — is destined to become a chapbook, Adventures in the Liaden Universe® Number 30.

So, that’ll keep me busy for a while, I guess.

And now you’re up to date.

So, recovery is a strange country.  I’m not in the habit of thinking that I actually do very much of an ordinary day, so it’s a little — no, make that considerably — annoying when I can’t complete what I consider to be a normal day’s to-do list.

Yesterday being a case in point.  I went to the gym, did my strength training, pushing a little, because you’re supposed to challenge yourself, amirite? — walked 1.11 miles in 21 minutes (this includes the cool down), and tried to feel that this was a success*.  Then I went to the grocery store, came home, and — smashed right into a wall. I was exhausted.  Steve made lunch, and after I still couldn’t keep my head up, so I jettisoned the rest of the to-do list and spent the afternoon under a shifting blanket of cats, reading.

Today, it’s snowing (the Weatherbeans are calling 4-9 inches), and is any way a non-gym day, and here we have the to-do list:

3  Get with the accountant’s tax packet: at least print it out and get the letter in the mail

. . .It seems a very slight list, but the idea is to Hit No Walls, and if that means vacuuming tomorrow, then — the cats get an extra day of peace and quiet.

*(This was after the first treadmill I was on spontaneously leapt from 3 mpg to 14 — I hit the STOP realfast, youbetcha, but wow, what a rush.  The scary part being that the Planet Fitness associate on the spot couldn’t figure out Why It Had Done That.  I hope it doesn’t catch somebody else.)

**Apropos of Nothing Much, I’ve been chewing through the Mead notebook, which is lovely to write on with the fountain pens. Anticipating its final page, I bought a six-pack of Smart Campus “subject notebooks” by Kokuyo, offered by JetPens, which are supposed to be the bee’s knees for fountain pen use. We’ll see, eventually, I guess. Maybe even soon, given the fact that there’s this OTHER short story I really want to write, too, and have been putting it off because its a Maine Coast story, in the Archers Beach universe, but not set in Archers Beach, which no one will want to read, but sometimes you gotta just get stuff out of the way.

For those following along at home, I did find my desk, and here it is: 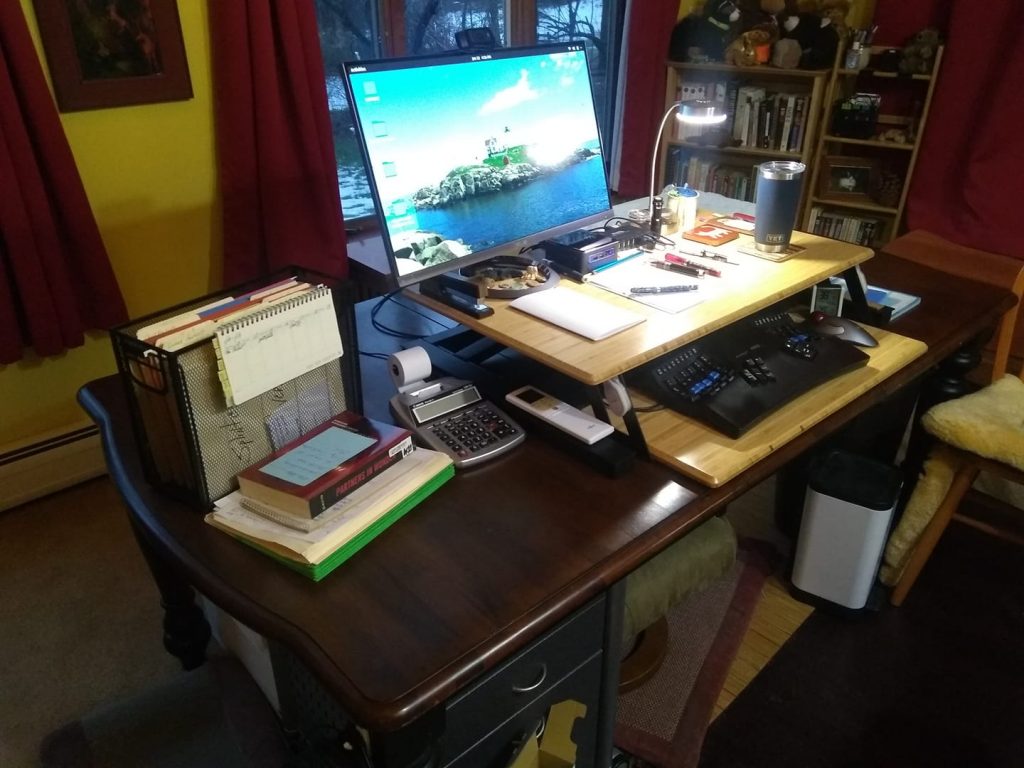 The revisions for Liaden Universe® novel Trader’s Leap have been turned in.

Now, I get to find my desk. 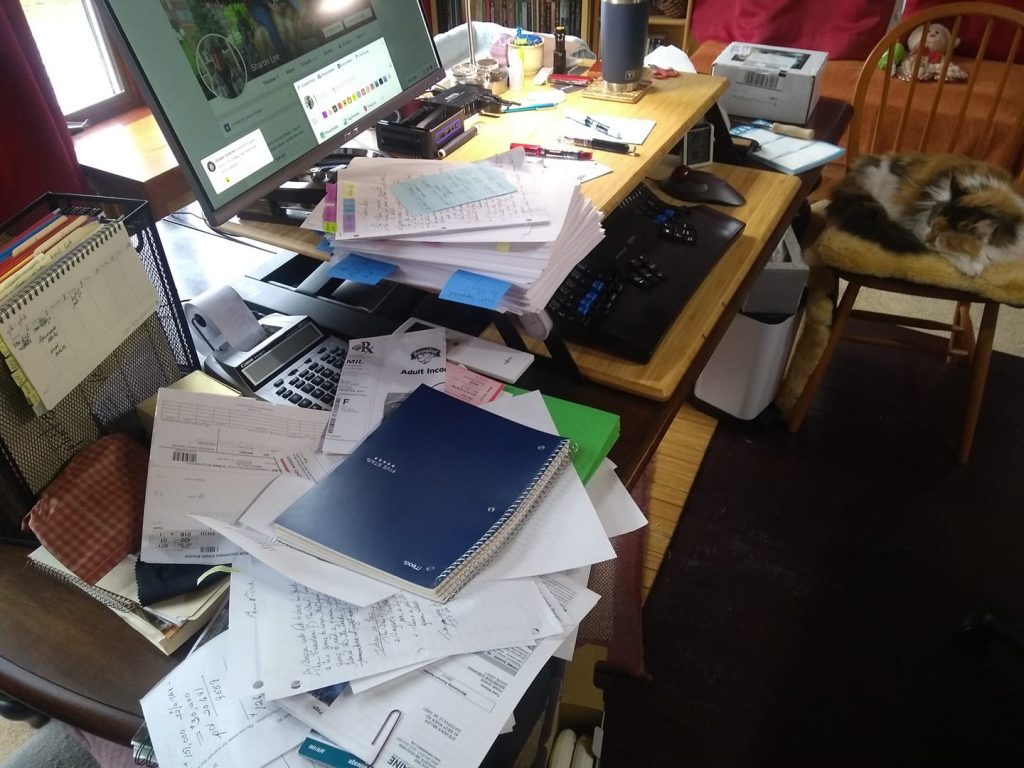 This message is for those of you who primarily connect with me through Goodreads.  I am, in the face of the ongoing carnage and lack of oversight demonstrated on Goodreads*, removing my account — in fact, I would have already removed it, save that the instructions provided on-site for deleting an account are, um — inaccurate.  It will take Goodreads 5 days to get back to me on this.

Apparently, authors can not leave the system entirely — Goodreads will still record new books and publish reviews — like Amazon.  But I will not be directly involved even in the small way that I did participate.

Those who wish, can bookmark and follow this blog.

Thank you for your understanding and patience.

*For those who have not been following the story of carnage and lack of oversight, I offer this synopsis of events, compiled by Jason Sanford.

In related news, many-to-all (depending on your news source) of the credit unions in Maine are off-line as the result of mysterious “connectivity problem.”  This is not as much fun as it may at first seem.

We here at the Cat Farm and Confusion Factory are clinging to our last few precious Not-Sundays.  There’s writing to do and writing being done, as well as chores, of a sort, but it’s all being done in a soft bubble, almost a “deadline free zone,” which we all know there’s no such thing, but — it’s been pleasant to pretend for a week or two.

Deadlines and doctors appointments return Monday morning, quite early, so we’ll be getting back into the Daily Push realsoonnow.

My first-in task today is to clean the so-called Boy’s Bathroom, and to steam clean the kitchen floor.  After that, there’s the final sweep at the WIP.  After much banging my head against various metaphorical, logical, and fictional walls, I have figured out how to straighten the last kink in the last scene.  Go me.  The entire corrected manuscript ought, I think, be on its way to Madame by the end of the week, and then?  I won’t have anything to do.  [Cue laugh track]

Looking ahead, Steve and I will be attending Boskone in mid-February, and!  We will be Guests of Honor at NarniaCon, aka the Coat Check Con.  NarniaCon hosts a scavenger hunt within Boskone entire; this year’s hunt will be based on the game of Clue.

. . .and that’s where we stand at the moment, still inside the bubble, with the cats napping inside, and the sky grey with snow clouds, outside.

Today’s blog title brought to you by one of my hometown bands, Talking Heads:  And She Was.