When last we heard from Yr Hmbl Narrator, she was looking forward to eight glorious, empty days, with nothing to do but play on Tinsori Light.

And that’s sorta what happened.  To a point.

I knew going into the week that I needed to complete my application to take part on panels at ChiCon 8, which is ohsomuch more complicated than you’re envisioning, and with a deadline involved, but I figured to pursue that project during my writing breaks.

It started out well.

Steve had a dental appointment on Monday, but my services as a chauffeur were not needed, so I stayed home and — wrote.  Tuesday was also pretty good, right up to the point where we heard from the narrator for Liaden Universe® Constellation, Volume Two (coming soon from Tantor!  link), who was requesting a Weird Word List and a recording of same.

This was great news!  Only — Weeding through more than a dozen stories for the Weird Words consumes Serious Time, and — book isn’t going to write itself.  Happily, I hit on the notion of asking for volunteers, and giving each of them one story to read.  And — long story short — many hands quickly returned separate lists of Weird Words, which I was able to compile into a list over the next few days.

Meanwhile, in Wednesday, we took Belle to the vet for her annual wellness check, and, later that same day, Steve and I got long overdue hair cuts.  The day was further livened by the arrival of 12 cases (240 books) hardcover edition of Fair Trade, for us to sign, repack and get ready to be picked up by UPS on Monday and given a ride to Uncle Hugo’s in Minneapolis.

While 240 isn’t a lot of books (back in the Meisha Merlin days, we signed thousands (yes, it’s true) and mailed them, too), but it’s a goodly number, plus I’m not a young thing of 50 anymore.  So, we took some time to sign books, and box them back up — all done by Saturday evening, when I bore down and finished the ChiCon survey.

Then, he boxed up the signed books, sealed the cases, attached the UPS forms, and in short got everything ready for Monday’s pickup, while I?

Finally got back to work on the WIP.

And discovered that my laptop has died.

Today, I’ve been writing.  Sixteen hundred words on the day, so far, and Salvage Right has just broken 93,000 words.  Support at System 76 has gotten back to me with a suggested course of action for the laptop, which I’ll pursue this evening, and tomorrow! Between 12 and 5, UPS will swing by and pick up 12 cases of Fair Trade and take them to the Uncle.

So, next week’s looking pretty good for writing — there’s some phone calls and Real Life stuff to deal with, and a Zoom interview with Baen host Griffin Barber on Thursday night, but pretty clear.

I want to say that the cats have been very supportive during these unscheduled rushes and boxings.  Trooper was particularly involved in the signing part of things. 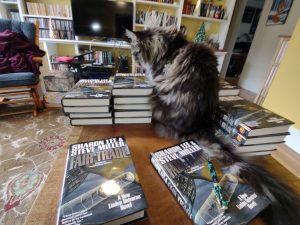 And here’s a picture of Trooper being removed from the signing table by Yrs Trly.  For scale, I am six foot tall, and weigh 165 lbs.  Trooper weighs just a thought over 17 lbs. 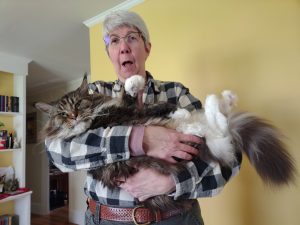 So!  Now we’re all caught up.  If you preordered a signed copy of Fair Trade from Uncle Hugo’s, you may commence waiting for delivery on May 2.

4 thoughts on “That was the week that was”