So, Steve and I have been out and about and in and around, we took a drive up into the Western Mountains on Saturday, I’ve been working steadily on the next novel (still lacking a title), Steve has finished up “Shout of Honor,” and now I’m moving on to making that into Adventures in the Liaden Universe® Number 29, with a planned release date of May 15, while he reads the new beginning of said titleless book.

All of this is enough to keep us busy, but it makes dull blogging.

I can give you a little excitement today, so hold onto your hats.

Here’s the cover for the upcoming chapbook. 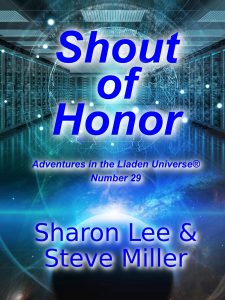 *Full verse:
Spring is sprung; the grass is riz
I wonder where the birdie is.
They say the bird is on the wing,
But that’s absurd.  The wing is on the bird.
–Spike Jones**

3 thoughts on “Spring is sprung; the grass is riz*”