For those who missed the earlier announcement:  The eArc of The Gathering Edge, the twentieth novel set in the Liaden Universe® created by Sharon Lee and Steve Miller, is now available from Baen.

EArcs are only available from Baen; they are a specialty item that arose from the Baen Barfly community many years ago. EArcs contain errors in sentence structure, spelling, grammar. However, in our case at least, The Story is the exact same story that will be finally published in hardcover and in ebook.  EArcs cost more than the regular ebook edition because you are getting The Story approximately three months’ ahead of final publication.

Belle and Sprite have entered the Betting Pool again for this release.  Details of the wager are included in this blog post.

For those who have downloaded the eArc of The Gathering Edge, read it, and now want to Talk About It, there is a spoiler discussion here.

Yes, the Uncle, aka Mr. Blyly at Uncle Hugo’s Science Fiction and Fantasy Bookstore, will once again be offering signed and/or personalized copies of the new hardcover.  We’ll let you know when the pre-order page for The Gathering Edge goes live.  In the meantime, there are still some signed copies of previously-published Lee and Miller titles here.

Neogenesis, formerly Fourth of Five, has been turned in to Baen. Yes, Theo does make an appearance in this book.  It is not, however, a “Theo book.”  Neogenesis is currently scheduled for hardcover/ebook publication in January 2018.

We have five books scheduled for delivery after Fifth, so we continue to run the Red Queen’s Race here at the Cat Farm and Confusion Factory.  This is, as you know, All Your Fault — yes, you over there, it’s your fault, too!  — and we thank you very much for your continued support.

The books come in two contractual packages, to wit: the Masks (2 books); and the Triple Threat (3 books).  They will be set in the Liaden Universe®; beyond that — no, we don’t know, and it’s no sense asking.  It really doesn’t do much good to  talk about deadline dates this far out, but we’re looking at having work into the next decade.

Here, have a picture of Belle on my printer: 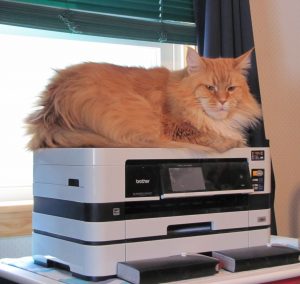