Today, I’m going to be talking about depression. Which counts as fair warning: Those who have no interest in this topic may wish to move on, now.

Long-time readers of this blog will recall that I do indeed “have” depression.  I also “have” hypothyroidism, another chronic illness.  I’m lucky in that these are the sum of my health afflictions, given All, and in balance neither really gives me. . .much problem.

Except, yanno, when they do.

The most recent depressive incident. . .which started to cloud in sometime, oh, around mid-2015. . . It wasn’t too bad at first — this is a chronic illness, which I’ve had for my entire life.  After you’ve lived with something for upwards of half-a-century, you develop coping strategies and rating systems, among other tools for getting through the day.

Anyway, the clouds started forming in mid-2015.  I did those things I knew to do — made sure I was getting enough (but not too much) sleep, and exercise, and interacting with people in Real Life, persisting at doing things that would normally give me pleasure. . .and, as sometimes happens, nothing much worked.  The clouds got blacker, and thicker.  I got duller, and forgetful, and even more inarticulate than usual.

Everything hurt, by which I mean it hurt to think, it hurt to have to cope with anything; personal interactions felt like a series of paper cuts — not stab wounds, because frankly I couldn’t work up enough energy to feel stabbed.  Life was a burden, and thinking was exhausting.

I drew hard on the cats, but even such cats as ours can only do so much, and belatedly I realized that white-knuckles, and waiting it out wasn’t getting me anything but duller, darker, and more exhausted.  My writing was suffering, and everything else, too.  So, I went to the doctor, reviewed the situation, and received a prescription for antidepressants.

I don’t like to take antidepressants, personally, so the ‘script was low-dose, just enough to take the edge of the pain, and make it possible to write, and more or less get through the day.

Things were still dreadful, naturally — the Black Dog had not left the room, he was just curled up on the rug, watching. Everything was still too hard, there was no joy, no humor, every one of my accomplishments was a failure in my mind.

And, all that changed, about a month ago.

No, it wasn’t the drugs; the drugs were only to help me continue coping.  And it wasn’t an Awesome Change in my General Situation.  Mark this, now, because it is key — nothing had changed.

Except that the Black Dog had left the building, and I was no longer depressed.

My accomplishments were once again victories; the fact that I’m old is a victory, because I really never expected to make it out of my thirties; I’m married to my best friend; I have energy; my vocabulary has leveled up; I can say what I mean to say — and I want to say it.

Since the last dark episode was so very long, I’m hoping to be Black Dog-free for quite some time.  I do so much enjoy being able to think clearly, and not have to fight for every concept — I can’t even tell you.  I enjoy being able to have ideas for stories*.  I enjoy — well.  Everything.

So, that’s all; no life-changing insights here.  Except that it always does amaze me — the change from dark to light, when it happens.  And the worst thing that depression does, among a dark legion of bad things — is withhold the hope of light. 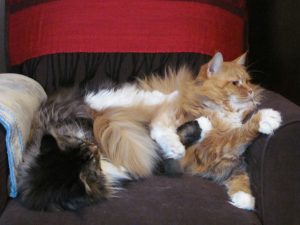 ________
*The moment I knew I had to do something other than Just Wait It Out was the moment when Steve and I were, supposedly, brainstorming a story, and I looked at him, said, “I don’t know, and I don’t care!” — and burst into tears.

24 thoughts on “Talking about the Black Dog”