From Every Storm: Adventures in the Liaden Universe® Number 35, by Sharon Lee and Steve Miller has been submitted to the Usual Vendors for preorder.

At the moment, it is listed on:

. . . with more being added as things work themselves through the distribution network. So, if you don’t see your favorite vendor in the list above, keep checking back.

Things You Should Know, Part One.

Things You Should Know, Part Two

From Every Storm is a chapbook compilation of three Liaden Universe® stories, one of them never before published. The storms of the title spring not so much from the desert or the deep blue sea but from the minds and hearts of humanity, where greed wars with truth and justice, and where sometimes the supposed end of storm is a mere hurricane eye portending greater potential for damage ahead.

First up is “Standing Orders,” a finalist for 2022’s WSFA’s Small Press Award for Short Fiction, originally published in Derelict, a 2021 ZNB anthology. What happens at the end of a war that no one really won, where victory came at the price of acting more like the enemy than the High Command ever should?

Next is the previously unissued “Songs of the Fathers” a story dealing with Shan yos’Galan’s sometime trade partner Lomar Fasholt and her family as they struggle to follow her Mother’s religion as it morphs from loving to acquisitive, from flexible to aggressively rule-bound. Lomar’s a good mother and wife but her self-exiled family’s suffered greatly through this storm of changes. Will they find hope amidst the tumult?

Finally, there’s “From Every Storm a Rainbow,” the 2021 holiday story from Baen.com, wherein Sinit Caylon comes face to face with the perfidy of her absent brother while the accountant’s guild is trying to help Clan Mizel come about after years of of her mother’s abdication of responsibilities to Ran Eld. Sinit thinks the storm must be about over until it become obvious that between them her mother and brother may have fatally endangered the clan’s brightest future. 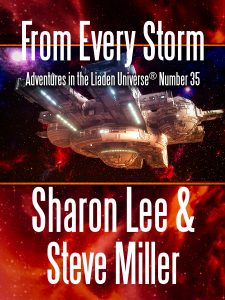