So, yesterday, Steve and I arrived early for our 1:00 pm signing at Sherman’s in Damariscotta.  This was According to Plan.  We had a small walk, and a pre-event picnic, did some surprise shopping at Reny’s — I can’t actually remember the last time I went into a store to just wander around and see what’s there — and it was time to perform.

We arrived to find the table set up for us.  We were greeted by Megan, who provided drinks, and left us to it.

What a grand, busy bookstore Damariscotta has!  Even better, it seems that its patrons appreciate it, and are happier for its presence in their lives.

We were positioned right at the front door, and our come-on was “Would you like a free bookmark?”  I think every person we offered a bookmark to said at least, “No, thank you,” and many people were much kinder — “Your books?  Well done, you.” Lots of people took bookmarks.

And a couple dozen people stopped to talk, not just about our books.  We had several wide-ranging conversations — about bookstores in general, about writing, about the difference between the game extension and the core game, about what it was like being the “Play-Doh engineer” at Loring, about being in the entertainment business . . .

One person did stop by the table to ask me if “we” had a Unicorn Department, and I sadly had to explain that I didn’t work at the bookstore, but that I had seen a unicorn plushie in the section behind where we were sitting.

In addition to people, we met several very personable dogs.  I have long been low on Vitamin Dog, so that was an unexpected benefit on the day.

We sold about a dozen books, and gave away a zillion bookmarks/postcards/cards — so, a successful day on many, many fronts. We’re very grateful to Sherman’s for hosting us in our first book signing since, well Forever.

We stopped at Roundtop on the way home for milkshakes, then Steve brought us home via Route 218.  Windsor Fair was on, so instead of cutting that corner, we went out to Augusta to make the right, stopping at the Hannaford on the corner to take on fruits, veggies, and pizza.

If you missed us yesterday, we’re going to be at Sherman’s in Topsham next Saturday, September 3, from 11am-1pm.

In the meantime, here are some photos from yesterday. 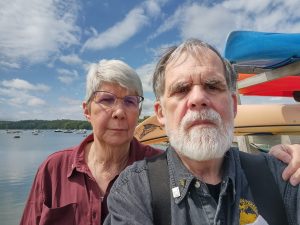 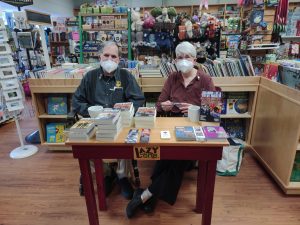 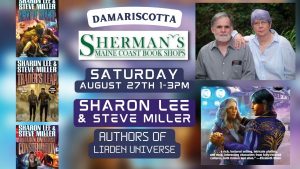 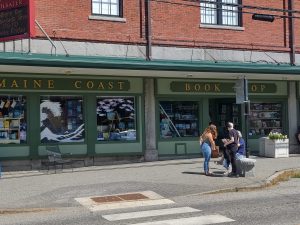