Today is the Official Book Day for Liaden Universe® Constellation Volume Four, published by Baen Books.  For those who are new in the neighborhood, this is be the fourth volume of Sharon Lee and Steve Miller’s collected Liaden Universe® short works.  All stories in this volume has been previously published. The stories included are: Street Cred, Due Diligence, Friend of a Friend, Cutting Corners, Block Party, Degrees of Separation, Excerpts from Two Lives, Revolutionists.  The book also includes an Authors’ Foreward.

You may purchase Liaden Universe® Constellation Volume Four from your favorite bookseller.  It is available in trade paper and as an ebook.  There is no audiobook edition.

For those who are familiar with the game, and who may be waiting for news of the books you preordered for signature — I have news.

The news is:  Four (out of a possible five) cases of Liaden Universe® Constellation Volume Four are on a UPS truck and out for delivery.  They should arrive here at the Cat Farm and Confusion Factory today.  The fifth case has been detained in Chelmsford, Mass., for an address check.  The Theory is that it, too, will be delivered today, but I. . .am not sanguine.

In any case, as soon as we have books in-house, Steve and I will grab our signing pens and get busy.  Hopefully, we can have the majority of the books back on the road to Uncle Hugo’s in Minneapolis no later than Friday morning.

I have been somewhat remiss in updating this blog.  To catch us up, quickly, we have been working — still with the proofing of Conflict of Honors — a little better than half-way done, now — words are being written on the still-titleless Next Novel, some of which are replacing words that had already been there, so the whole thing right now feels very much like I’m running the Red Queen’s Race (I say “I” because I am lead on this book).  In addition to Standing By on the current WIP, Steve is writing a short story, and also the third Jethri Gobelyn book (no title there, yet, either).

We’ve also been coping with Real Life, as everyone must — health stuff, family stuff, political stuff — y’all know what I’m talking about.

Steve and I did take part in a little hometown activism last weekend, which was Pride Weekend in our town.  Part of the festivities included a Drag Queen Story Hour hosted by local bookstore.  Some folks became offended by this, and organized a protest — which was fine* — and some other folks organized a counter-protest — a demonstration of love for our local bookstore, support of the story hour and for Pride Weekend.  Steve and I were there in support of the bookstore, and mostly, it was good.  Tiring, but good.  For those interested, here’s a link to the local newspaper’s coverage of the event.

And here’s a picture me getting ready to demonstrate. 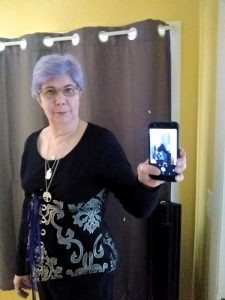 ________________________
*Forgot my footnote, to wit! WHAT WAS NOT FINE was that some of the outraged citizens took it upon themselves, pre-event, to harass and threaten the Drag Queen who was scheduled to do the reading to the point where she feared for her safety, and withdrew from the event.  Happily, Miss Ophelia was pleased to step in and read to a room that was shoulder-to-shoulder, and that’s with some of the smaller folk sitting on shoulders.

5 thoughts on “Book Day and Other Stories”