Today, there are no contractors on my schedule.

The painter is at work in the new house, and figures to be done by the end of next week. The contractor has been chosen to install the pantry which is even now being constructed to April’s specs.  Rug Guy Number One: The Measurer has been to the house and measured my office, and the bedroom.  Rug Guy Number Two: The Installer may call today to set up an installation time, but probably, says Rug Guy Number One, that’ll be Friday.

The estimate for the actual physical moving of Stuff from Here to There  has landed — they figure five hours to load and five to unload which — eek!  On the other hand, it took us almost 30 years to fill the place up, so — fair enough.

Just to show we’re Serious about this, shelf paper has been purchased.  Also BIG Post-it sheets, in order to create signage for the moving guys.  LR, DR, SHARON’S OFFICE, STEVE’S OFFICE, TECH ROOM. . .and so on.

To recap in Short Form: Things are still on schedule for us to shift by the end of April.  We will then do turn about with the various contractors, in order to get the old house ready to sell.

Today, I will be doing laundry, and packing, and perhaps taking a nap — all these early morning meetings are catching up with me.  Also, I need to start thinking about a short story.  And a novel, too — I haven’t forgotten the novel, trust me.  But it will be easier, in this brief day or two of relative peace, to think about a short story, and getting it off the to-do list will open a (relatively) uninterrupted swath of time for the novel.

The cats have been diligent in rewarding normal behavior.  Yesterday, we had page proofs to go over, an activity which was enthusiastically endorsed by both Belle and Trooper.  As I write this blog post, I have Trooper in his basket to the left of my keyboard, and Sprite in her basket to the right, both asleep and determinedly unconcerned.

And that? Catches us all up, I think.  Hope your week is running on-schedule, with quiet-time inked in.

Here’s a picture of Belle, helping with the packing.  What a work ethic that cat has! 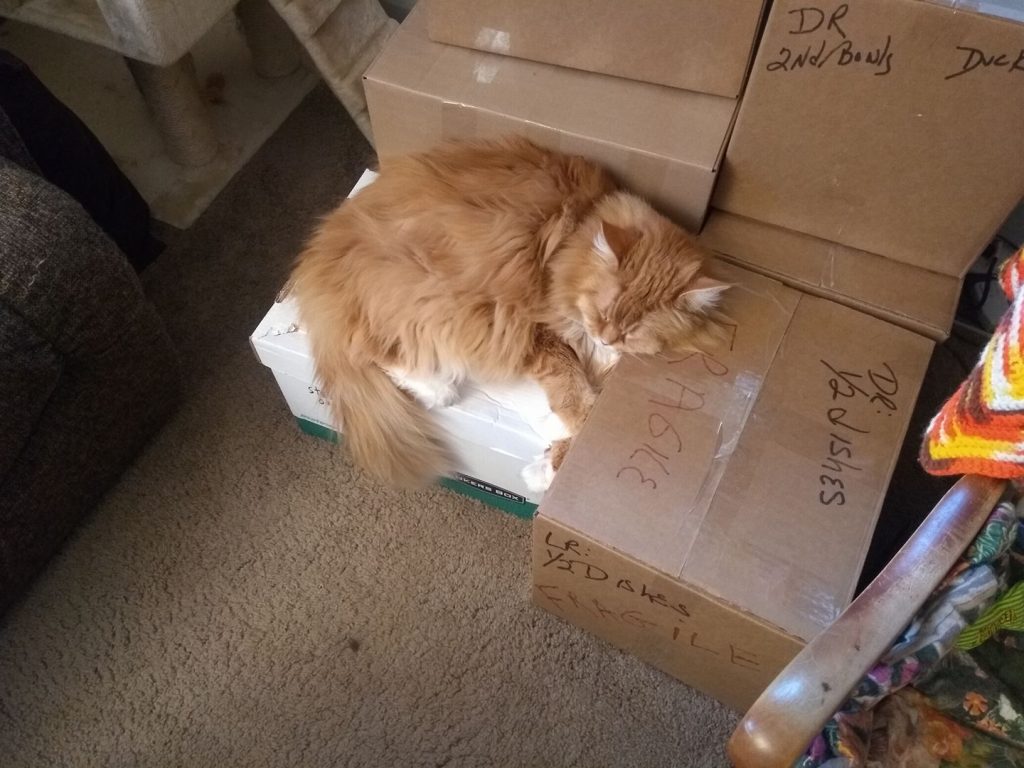 4 thoughts on “Marching in Place”