So, there are the tasks that one does at Year-End — filing away the old year, opening the accounting for the new year.  To the best of my ability, these things have been done for the Cat Farm and Confusion Factory.  Which gives a nice feeling of accomplishment, without, yanno, actually having accomplished anything.

Peering forward into the first week of the new month and new year, I see that Tuesday is!

I, for one, am looking forward to receiving my copy of Emergence by CJ Cherryh, as I know many who read here are.

I am also looking forward to the release of the hardcover, ebook, and audio editions of Neogenesis by Sharon Lee and Steve Miller.  It’s a well-known fact that time runs oddly around writers, and so it simultaneously feels like it’s been a long time since we handed in Neogenesis and hardly any time at all.

Sometime next week — possibly Monday — I’ll be putting Degrees of Separation: Adventures in the Liaden Universe® Number 27 up for pre-order at various online outlets.  Official publication date is January 15.  I anticipate no problems with hung releases, as Degrees is an all-original, never-before-published, never-posted-ANYwhere-else-even-for-a-day, story.  It will also be available as a paper book from Amazon on January 15.

Let’s see…Steve and I will be doing a podcast interview for the Baen Free Radio Hour on Wednesday; those are always fun…

Looking backward for a moment, we have finished and turned in “Revolutionist” to the Razor’s Edge anthology to be published in August by Zombies Need Brains.  And I had an epiphany recording Fifth of Five, which, in the way of epiphanies everywhere, meant the manuscript got busted back under 60,000 words again.

Today, I will write, and do laundry, skritch cats, spend time with Steve.  Possibly, we will see the New Year in — we’re often up that late, just as a usual thing — but if we don’t, it will arrive just fine without us.

Everybody stay safe; see you in the new year. 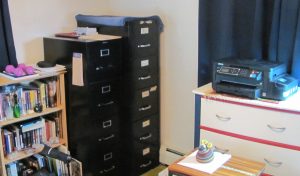 3 thoughts on “On the last day of the year”