So, today Steve and I went up to Bangor to attend the ACLU’s Active Bystander’s Intervention training session.

It was an interesting workshop, and worth doing, if the ACLU in your area is participating.  I learned some de-escalation tricks that are probably more appropriate for a purple-haired woman of a Certain Age, and was reminded to be mindful of what I bring to any situation — such as being a white woman of a Certain Age, and the fact that I often these days have my cellphone, with its camera, close at hand.

I also learned that remarkably little things can make a difference to someone who is being harassed.

One funny thing:  We were doing practice sessions in groups — each group given a situation that had occurred in Maine, and we would discuss how best to handle the situation.  One of the two scenarios given to my group was this:

A person is in the bathroom washing their hands.  Another user yells at them, “Hey, dude! this is the woman’s bathroom,” and follows up with, “You don’t belong in here!”

Now, because I was for most of my life “man-tall” (6 foot), and often wearing gender-free clothing, such as jeans and flannel shirt, and had short hair, I was — and am — very often mistaken for a man.  Especially in the ladies room.  And I have been yelled at any number of times for being in the wrong bathroom (yes, going back decades), and no one every intervened.  It didn’t occur to me that anyone should. I would say something along the lines of, “This is the woman’s bathroom, and I’m a woman,” and try not to laugh when their chin hit the floor.

In fact, it was only recently — I was in the ladies room in Lowe’s in Augusta, and another user told me to use my own bathroom.  A woman who was washing her hands near us finished up, but stayed in the room.  I gave my stock reply, and my critic quickly left the scene.

The woman who had waited said, “I can’t believe she said that.  Are you OK?”

I thanked her, said it happened all the time, and I was more or less used to it.  But it gave me a nice glow, just the same; knowing that someone had cared enough to wait what could have been A Scene out, and then to ask if I was OK.

So, that’s how I spent my Saturday, mostly.  After the training session, Steve and I went to Tesoro’s on Harlow Street in Bangor for a late lunch.  My lasagna was terrific, and Steve was very impressed with his veal.

On the way home, we stopped for ice cream at the Purple Cow, about which the less said, the better, and so eventually were received back into the care of cats, who wanted the windows opened NOW. 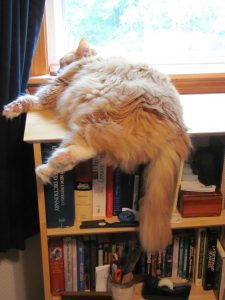 5 thoughts on “Stepping up”