So, the folks across the road from our back woods are building a house.  This is nothing new, they cleared the lot, oh, four years ago, and from time to time a truck and a couple guys would show up, perform Mystery Tasks and go away again.

Well, apparently they decided that This Summer is the Summer of the House, and they’ve been going at it, hammer, tongs, bulldozer, dump trucks, and electric drills from early to late.  Last night, the last dump truck delivery happened at 9:30, as I was reading a chapter from The Cat Who Saw Red (we alternate chapters), and the cats were in their places in the kitchen, listening avidly (big Koko fans in this house; though Trooper thinks Yum-Yum is just shy) — and we all jumped at least a foot when the gate slammed open.

It’s gotten to the point that I can’t really figure out what they can be building down there.  Based on the amount of activity, it may well be an apartment complex.  Or possibly a space elevator.

Today included baking another couple loaves of bread, which turned out well, and have been tucked into the freezer next to a half-loaf of last Friday’s Pullman bread.  I think we’re good for bread for the next week or so.  Which is a mixed blessing.  May have to switch to making cookies for displacement activity — which is a much more perilous undertaking.

I have, in between this and that, finished the first draft of “Due Diligence,” and have put it aside to rest while I pursue other work.  Such as choosing and reading the next story for our Patreon supporters*.

Speaking of which, I have one more bit of business to finish this evening, and then I’m done for the day. 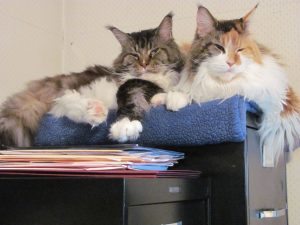 *Not a Patreon supporter?  Check it out.

2 thoughts on “Beginning the week”