. . .it was hot.  All four cats were in my office, because Ceiling Fan, but — it was still hot.  More hot coming tomorrow.  Yay, summer.

We have a title for the upcoming chapbook.  Here it is:

For those coming in late, this chapbook will contain two stories:  “Chimera,” which was published at Baen.com in May 2015 (I may have said April last night; we turned it in in April; it was published in May in support of Dragon in Exile, which was a June book.  Ta-da!), and “Friend of a Friend,” a brand-new story, also set on Surebleak.  The book will include an author’s foreword.

Distant early warning!  We will be increasing the price of this chapbook, and all/any future chapbooks, from $2.99 to $3.99.  Thank you for your understanding.

I had hoped to get Sleeping. . . uploaded at least to Amazon tonight, but — it ain’t gonna happen.  Possibly tomorrow night (more likely Sunday afternoon, though, because Book Signing tomorrow).  In any case — soon.

As alluded to above, tomorrow, Steve and I will be signing book and talking trash at our local indie bookstore — Children’s Book Cellar, 52 Main Street, Waterville — at 2 pm.  Drop by and see us if you can!

And I think that’s all the news. 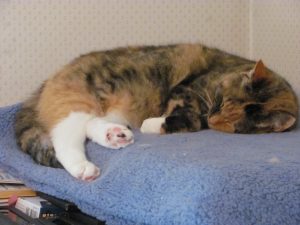