Woke up early because the power went out (and came back on before the generator could engage).  Guess everybody was running their A/C and fans against yesterday’s heat wave.

Steve made omelettes for breakfast, after which we moved on to working on the chapbook until it was time to head out to Children’s Book Cellar and our signing.

Driving in, we realized that the event could very easily go until 4:00 and we had neglected to eat lunch, which was — as nearly everything can be made to be — an excuse to stop at Dairy Queen on the way in to Waterville, in order to purchase milkshakes to sustain us in our Time of Fame.

This involved some unanticipated delay, since there appeared to be a hazing going on at the College Avenue Dairy Queen, which left one newbie on duty at a very busy counter, while four of his colleagues lounged in the back room.

Still, milkshakes were achieved, and we arrived Exactly on Time at Children’s Book Cellar, to find a Mighty Crowd awaiting us, including Carolyn Smith and her husband, from Stoneham, Massachusetts, and our own James Hetley, down from Bangor, as well as some local folk.  We had a blast, and hoping our audience had the same.  Thanks to everyone who came to see us, and for Ellen Richmond and the Children’s Book Cellar for hosting us!

After our event, we hit the grocery store, returned home, and got with the ebook one! more! time!

On that front, I am pleased to report that Sleeping with the Enemy is now “publishing” at Amazon, and BN.  Expect to see the title on sale somewhere in the next 24 to 48 hours.

EDITED TO ADD:  The book is on sale NOW at Amazon.  Here’s your link.

Draft2Digital will be uploading the book to its vendors (Kobo, iBooks, Inktera, Scribd, 24Symbols, and Tolino) on its usual schedule.  Remember!  You will not be able to purchase this title through Smashwords.

Tomorrow, it’s back to the manuscript.  Monday may possibly be an Ocean Day.  We shall see.

In the meanwhile, it’s still hot, though not so much as yesterday.  We hold out some hope of rain tomorrow, which will be, so they (They) say, cooler than today.  Monday, however, we’re right back into the frying pan, and looking to stay there awhile.

Speaking of Alliance — if you’ve read the book and want to talk about it, there is a spoiler thread here.  Please do feel free to make use of it.

And now?  I believe I see the cabana boy in the distance, bearing a bottle and a corkscrew. 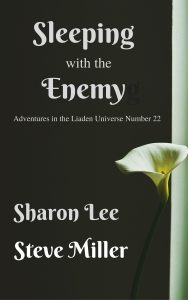 3 thoughts on “In which busy writers are busy”