Once Upon A Time, back in the late 1980s, it was difficult for authors and readers to get together.  If you were a science fiction/fantasy writer, you could travel to SF conventions and get face-time with readers, and sort of hand-sell your work.  If you were a fan of a particular book, you might, if you were Very Ambitious, or energized by the Magnificence of the Work, write to the author’s publisher, who might, or might not, remember to pass the letter on.

Book reviews were written by book reviewers and published, in hard copy, in various magazines and newspapers across the country, and if you were a genre writer of science fiction or fantasy, you could pretty well forget being reviewed anywhere except, maybe, Locus, which, by the 1980s, had completed its morph from fanzine to trade journal, or possibly (as we were) in Romantic Times (founded in 1981 as a print review magazine).

Reader reviews, except for reviews in fanzines were. . .not too common.

It was a heady time.

And into this heady time of connection, Amazon.com was born.  They realized that word of mouth was important, and that readers/customers find it valuable to compare notes on books — especially books, I’ll say, because I’m a writer and books are inordinately important in my life.

We here in the Liaden Universe® converted our paper newsletter to an email newsletter; we benefited greatly from a Liaden Universe® mailing list set up by a fan — a list that still lives today, administered by another fan, though, with all the other social media options available, a much quieter life than it enjoyed in its heyday.

Eventually, we migrated to other platforms, LiveJournal, where my blog, Eagles Over the Kennebec, has been posting for. . .12 years, come March.  We also moved to Facebook, and to a very lesser extent, to Twitter.  I understand that there are other, cooler, places to connect readers and writers nowdays — the point being that those connections are continuing, and growing.

Indeed, connection is what the internet does best.  Publishers understood it, at last, and began demanding that authors go out, connect with their fans, do a blog tour — promote their work!  The Theory of the Long Tail was espoused (we’ve talked about that before, here), and misunderstood, and continues to be both misunderstood and not quite accurate to this day.

Now, since my life has, perhaps, been stranger than most, I have readers, and friends, and friends who are readers, and people whom I’ve “known” for twenty years and more, whom I’ve never had the pleasure of meeting in the flesh.  I have friends who I only see at conventions; and readers, too.  And a whole lot of those people, and others, too — read my blog, or follow me on Facebook, or on Twitter or Pinterest or (as discussed here recently) on Patreon.

They do this because we have a shared history — be it high school, or the Liaden books, or a love of Things Feline, or an appreciation of Georgette Heyer, or because we’re colleagues — and want to stay in touch.

Connection is what the internet does best — for good or for ill.

Here’s a photo of one writer: 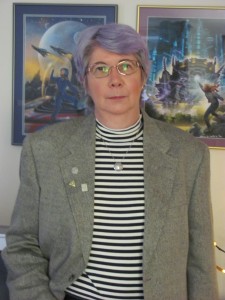 Sharon Lee is one-half of the writing team of Sharon Lee and Steve Miller, authors of the Liaden Universe®, as well as other high-class science fiction and fantasy works.  Sharon is also the author of a contemporary fantasy trilogy set in a Maine resort town (Carousel Tides, Carousel Sun, Carousel Seas).  The next, 19th, Liaden Universe® novel, Alliance of Equals, will be published by Baen in July 2016.  Sharon and Steve are presently at work on the 20th Liaden novel, The Gathering Edge.

One thought on “How the internet works: One writer’s perspective”