So, let’s see — Amazon is taking pre-orders of Alliance of Equals, which is kind of crazy, but there you have it.

For those who like autographed copies, we have spoken to Mr. Blyly at Uncle Hugo’s and he professes himself willing to do the not-inconsiderable amount of extra work to make signed copies available.  However!  He would (rationally, in my opinion) like to wait until next year to place Alliance in his catalog, so that he doesn’t have to do even more extra work, like calling people whose credit cards have expired during the nine months between now and the book’s  publication date.

Bottom line:  If you want a signed copy of Alliance of Equals, which is scheduled for publication on July 5, 2016, Uncle Hugo’s will be taking pre-orders.  We’ll tell you when.  Or:  Watch the skies.

In other news, I made bread, yesterday.

This isn’t a particularly new thing; I like to make bread, and do so pretty often, but I have been on a Quest for a way to make sandwich bread for Steve.  Sandwich bread being uniformly square, and easy to cut, and (this is me) tastes like something other than paper, and doesn’t become glue in your mouth.

This  has been an Uphill Quest, and I was honestly despairing — my bread tends to…reject uniformity as a lifestyle choice, which, given the household, isn’t particularly surprising.  I’d about given up, and then, entirely by accident, I found this.  “This” being, in case the link expires at some point, a 13x4x4 inch Pullman Pan.

Here are pictures of my Pullman Pan: 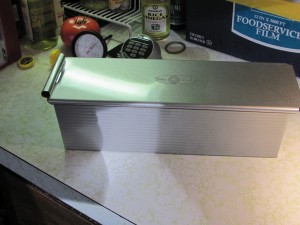 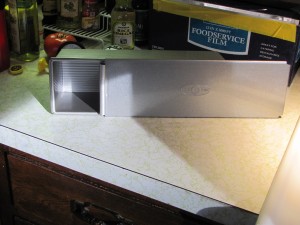 Observant readers will note that this pan had a lid, which keeps the bread from rising into a weird humped shape unsuitable for sandwiches.

This is what my first finished loaf looked like: 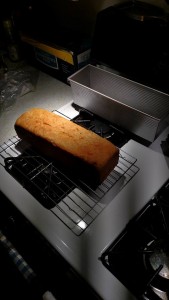 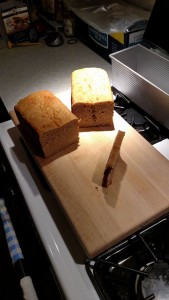 Yes!  It’s square(ish) and regularly shaped and altogether a Thing of Beauty. On top of that, it tastes great, and sliced (as you can see, above) thin.  I think we’re on the road to having a winner, here.

I’ll note that the loaf  did not rise quite as much as I thought it should.  Next time I’ll add rise time, because (1) our house is chilly, in bread-risin’ terms, and (2) I’m using whole wheat flour (King Arthur’s White Whole Wheat, in this case, which tends to be heavy lifting for yeast).

Also (my besetting sin) I combined two Pullman (aka pain de mie) recipes to make My Own, and I probably should have made one of the canonical recipes, first, to see how it’s Supposed To Look.

(Also, for those who may be wondering, “Pullman” is a shout-out to the Pullman train cars of yore, which, among other things, provided meals for their passengers.  Pullman bread was developed because it went together fast and always produced a uniform loaf that sliced thin, and was good for sandwiches and toast.)

Yesterday also included writing, as will today.  With luck and a tailwind, we’ll break 45,000 today, and something came clear about the structure just this morning, as the caffeine kicked in, so that will be helpful when it comes time to braid the various threads.

And that’s all the news from the Confusion Factory today

I wish a Blessed Samhain to all who celebrate.

And for the Facebook peeps, here’s a picture of Belle, trying out the unmade bed: 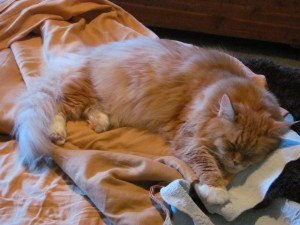