Well, let’s see.  This morning started early when Trooper leapt from the floor directly onto my hip, instead of the bed.  Eighteen pounds of Maine Coon gravity-assisted landing on a single point meant I jolted straight up in bed, Sprite, who had been asleep on my stomach, was catipulted off the bed and thence charged down the hall like all the demons of heck were on her trail. Trooper did the patented all-four-feet-together jump, twisted in mid-air and fled in her wake — and Belle watched the whole thing from the peace and tranquility of the headboard bookshelf, while Steve woke up, and demanded, crankily, “NOW what?”

I explained, got up and limped down the hall, returned to the bed, and so to sleep.  Steve did not return to sleep, which is covered in the Spousal Equity Clause, Subsection 1C  (i.e. “The party which needs sleep most will get it least”), and rose some minutes later, attended by Belle.

In the meantime, Trooper has become convinced that the Bed is Haunted, and tiptoes into the bedroom, craning his neck to see if The Giant Scary Thing is visible from the floor.  I picked him up and put him on the bed, and he reprised the all-four-feet-together jump and ran down the hall to take shelter under the kitchen table, Neutral Territory for many generations of felines.

After coffee and breakfast, I did the business email thing, then updated the Do It Like A Delm gallery for this week, with two new photos, bringing us to eight entries from seven bold entrants.  We’re hoping to see even more before this week’s Challenge closes.

To view the photo gallery of aspiring delms, follow this link.

After business was taken care of, I spent much of the rest of the morning getting to know my new phone, and doing the laundry.  I have determined that MotoVoice can actually hear and mostly comprehend me — which may be a first for voice recognition systems. There are still a few glitches to be worked out.  For instance, I can tell MotoVoice to turn music ON, but I don’t seem to be able to tell it to turn music OFF, which sort of limits its usefulness for situations in which I’m piloting myself.  But, still, there may be a way.  I’ve also been testing the phone’s camera, which is awesome; and the screen’s resolution — ‘way sharp enough for my old eyes to read a book — and trying to get some idea of how long the battery will last really.  So far, looking like 30 hours of mixed heavy use, and standby.  Which I’m not going to argue with, at all.

Having now consumed the afternoon meal, with the phone in need of a recharge, the laundry almost done, and all the cats napping — I guess I’d better get to work.

Here’s a picture taken with the new phone: 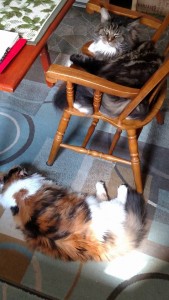 Oh, and a snippet, just for fun, from the Outtake File:

“Will I,” she asked, her voice sharper than she had intended, “ever be safe again?”

He inclined his head formally, as Jen Sar would do when an important point had been made.

“Scholar, I cannot say. However, it is an object with me, that those who are innocent of my errors will, one day, be safe again.”

Today’s blog post brought to you by Styx, “Mr. Roboto.”  Here’s your link.