So, yesterday, I went to Tai Chi, where I had what I feel to be a Significant Breakthrough in re Cloud Hands.  I can now — reliably, not beautifully, but we’re looking at a progression, here — I can now, I say, reliably go through the entire routine, insofar as the class has progressed.  Which is!

After Tai Chi, I came home, changed into Professional Clothing and beat feet to the hospital, where my day consisted of guiding people to various places inside the hospital and discussing the fact that I have purple hair.  (“Hey,” said one person. “How’d you get purple hair?”  “It came with,” I said.  Uproar of laughter.  I guess people in hospitals are tense, some.)

After shift-end, I came home (without checking my phone first.  Note to self: always check phone after you get off work), to find that Charlie’s Subaru Collision Center had called, and!

Kineo the Wonder Subaru was ready to come home.

It was then 4:25 pm.  Augusta is about a half-hour drive.  The Collision Center closes at 5 pm.  Yeah, I made it; walked in the door at 4:58 pm, claimed Kineo, returned the rental car, and drove home in the dark across Route 201.

This morning, Steve and I slept in, then fired Kineo up and took him for a drive, pausing briefly in Waterville to have a late breakfast at Toast Xpress (Steve had apple crepes, I had raisin bread french toast).  We went down route 32 to the very end, that being the Gulf of Maine, at Pemaquid Point.  We waved at the Atlantic Ocean, thanked the Pemaquid Point Light for its long service, and came home via Damariscotta, where we did not sign books at the Maine Coast Bookstore (now owned and operated by Sherman’s), because they didn’t have any of ours, and we felt that it would be rude to sign Jim Butcher’s.

We spaced around, chatted with staff, met Watson the bull mastiff (presently 4 months old and already bigger than a beagle), and eventually followed Kindly Route 1 to Augusta, and so to home.

I am pleased — and very, very relieved — to be able to report that Kineo drives just exactly like he had; there are no malfunctions (well, OK; the clock was wrong and all my saved radio stations got wiped), no Weird Noises, no surprises at all.  It’s as if last week’s little. . .episode. . .had never taken place.

Also — and on a side note — I cannot fully express how very, very grateful I am to have been able to do the entire drive — 124 miles, so not a monster drive, but still — without even once feeling sleepy, or dull, or that the drive was a burden I was almost too weary to bear.  And I owe it all to the new! improved! dose of thyroid meds.

Now, having returned from our early adventures and eaten lunch, I plan on fixing the short story I wrote a couple days ago, and plugging away at the tax paperwork some more.  Tomorrow morning — assuming I get up early enough — pickleball! 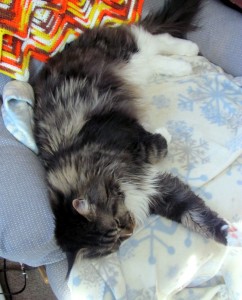 Kineo the Wonder Subaru, Saga of, The.

Monday afternoon, the wrecker (aka “tow truck”) dispatched from Charlie’s Collision Center picked up Kineo and transported him to Augusta.  Yesterday morning, Doug called to assure me that the frame was not bent, that the truck, being so much taller than the car actually worked in our favor.  Yes, the hood is bent in half, and a new radiator and A/C and headlights, and other this ‘n that’s are needed, but all is eminently fixable.  I expect new paint is in Kineo’s future, or possibly the all of the front end panels will be removed and replaced.  I don’t know how modular cars are nowadays.

Doug was going to order in various parts yesterday afternoon, and figured to have the repairs done in about two weeks.  Am still waiting for the insurance companies to come to some sort of accommodation in re a rental car.  If I don’t hear from one or t’other of them this afternoon, I will call first thing tomorrow morning.

So, the Kineo situation seems to be in hand, insofar as it can be in hand.

This morning I got up early and motored on out to Tai Chi, by myself, Steve still laboring under a really unruly cold.  Class has grown from four to ten, which is great.  Today, we did warm-ups and then learned Cloud Hands.  I say “learned”.  Let me be clear — I can do the hands part and I can do the feet part.  Putting them together — ain’t happening.

Well, that’s why it’s called “practice,” I guess.  Will try to work on the problem here at home.  At least I didn’t fall on my nose.  Not Falling on Nose being my benchmark for most things.

After Tai Chi, I went down the hall and picked up a game of pickleball.  It was a great game, despite I’m still learning.  At one point, one of the other team kicked the ball ‘waaaaaaaay high into the air — apparently this is her Sekrit Move.  And I dropped back and unfolded, as one does, raising the paddle over my head, and knocked it back at her.

“I didn’t think you were that tall!” she said.

Yeah, my partner and I lost, but only by one point!  Go, us!

Looking ahead, and assuming that our weather remains sunny and bright, while the mid-coast is being buried by the upcoming snowstorm, I’ll do pickleball Friday and Monday, then Tai Chi on Wednesday, then the volunteer gig starts at the hospital (there will not be any stories about the volunteer gig, because Privacy, but I know y’all were wondering if I was going through with it).  I’ll be able to play pickleball on Friday next week (again, weather permitting).

Since I now am a scheduled volunteer at the hospital, I qualify for “free” membership at the local gym, but! I have to go (to gym) six times a month.  So, I’m looking at pickleball: M/F; Tai Chi/volunteer gig: W; gym (mostly using the treadmill, I’m thinking): T/H.

Hopefully, I’ll be able to stick to this schedule.

And, now, having laid out the pattern of my life for the Next While, it’s time to do the laundry.

Here’s a picture of Belle, on the sofa: 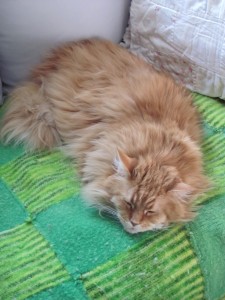