Much like being a Liaden Scout, being a writer is 98% mucking around in the mud, and 2% excitement.

And, after a brief period of excitement, we’re back to Business as Usual, which is exciting enough for those doing the work, but makes for poor telling.

SPOILERS FOR TRADER’S LEAP BELOW.  IF YOU HAVE NOT READ THE BOOK AND DON’T WANT TO READ SPOILERS, STOP READING NOW.

For instance, we are at the moment Reading.  I’m reading Trader’s Leap because the book I’m lead on next has to be the follow to that story.  There’s a minor problem developing because I’m more interested in the Matter of the Redlands than I am in getting Padi onto a trade ship heading into the Dust.  It’s early days, and my brain is still recovering from Salvage Right, so I don’t despair, merely note.

Steve is rereading all the Jethri books to date.  Again.  I think that I take from this that Trade Lanes is intended to be the wrap-up for the Jethri arc.  I could of course be wrong, or Jethri could intend otherwise.

I’m also pulling together a database of all our works, original publication and all reprints.  It’s not that we haven’t been keeping track of these things, but we started keeping track on cards, and just kept with it, since neither one of us is a database person, particularly, and there were Books to Write.  So, an hour or two of database work a day, to ensure that our Literary Executor will have something to work from, eventually.

In and around are the cats, of course.  Firefly is settling in nicely.  She hangs out with Sprite a lot, has a cordial relationship with Belle, and remains quite fond of Trooper.  She’s also Getting the Hang of Steve and me — no mean task.  She had early established the back of the couch as an Accepted Petting Zone, and has been expanding those territories.  She has become accustomed to me picking her up and holding her over my shoulder for a bit, or picking her up and carrying her to a chair for some chin skritches before Press of Business requires her elsewhere.  Most evenings, she joins me when I embroider — me in the rocker, and her in the jetpac under the table next to the rocker.

So, that’s the news.  Writers at work, and content to be so.

Here’s a picture of Firefly and Sprite: 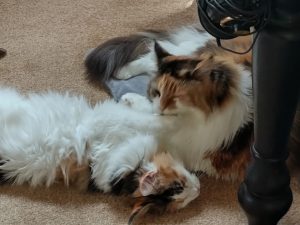