So, I’ve been working along at my Proper Business, and will in theory finish a story in first draft this weekend, which will give me room to start another story, while I’m doing my pass through the novel chunks given to me by Steve.  Turns out that I can edit/expand pieces of a novel and write one short story on the side, but not more than one short story.  A Revelation.

I’ve been neglecting my embroidery for a couple days, because of the tendency of the Proper Business of writers to slop over into every other part of life, but last evening, I thought I’d have a Go at designing/practicing my embroidered signature.

In all, I had three Goes.  The first two were worked in three strands of blue thread; the second in yellow thread, name in one-strand, date in two-strands.  Yes, yes, I’m telling you this for a Reason.

For my First Go, I decided to see if I was an Undiscovered Artist of Thread and could sign my name freehand.  Spoiler:  I am no sort of artist at all, a revelation that surprises no one.

For my Second Go, I used the so-called “fabric pencil” I had purchased at JoAnn’s to try to sign the fabric.  This was a Disappointment for several reasons, the most important being that the pencil dragged along the cloth and barely left a guideline at all.  Still, I Made the Attempt.  The result was Somewhat better than the freehand, and I was encouraged to think that, if I used not three strands,  which is standard embroidery sewing thickness, but one, I might get a more readable result.

For my Study in Yellow, I used a fountain pen to sign the fabric, which left a good sharp line for me to follow with my thread.  I signed my name with one strand, and it was readable, but I felt, too thin.  I worked the date with two strands, and I think I have found my Grail.

All of this doodling around with thread has, I fear, Inspired me.  I wish to create a sampler of my own.  To do this, I will need to practice my letters, but that’s not much of a hardship, there being tutorials on the web.  What’s going to be hard is getting my design on fabric so I can stitch over it.  I see people saying that you can transfer from PDF patterns onto cloth by using a sunny window (and a fabric pencil? errr…), but that really seems like a non-starter to me for what ought to be precision work.  I used to have a lightbox (yeah, no, not an artist — I did layout), but it’s gone the way of Things Long Ago.  I suppose I could buy a kid’s “toy”  lightbox; they’re cheap enough and ought to do the job.  OTOH, I’m already into this hobby for thread and needles and a sewing box, and I’ll really need to eventually break down and get an iron, and Where Will It End, I ask you?

So, there’s That.  And now the reason I went on and on endlessly about colors and thread and the Science of my approach.

Here are the Blue Attempts: 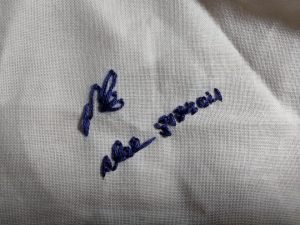 And here is the Yellow: 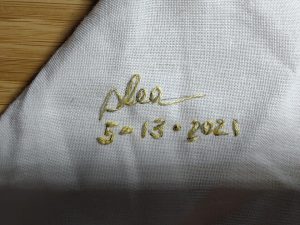 And, just for fun, here’s the sampler I finished the other day: 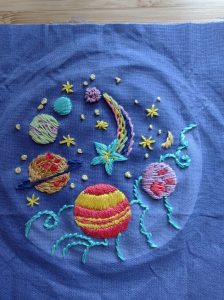 Today’s blog title is brought to you by The Crystals, “Then He Kissed Me.”  This is one of those songs from the 1960s that I love, and which would probably be Deeply Disturbing if I first heard it today.  Culture moves on, I guess.  Anyhow, here’s your link.

3 thoughts on “Well, he walked up to me and he asked me if I wanted to dance”