Today dawned bright and blue and sunny after a subjective quarter-century of rain, which Trooper celebrated by running up and down the house shouting, “Whoa! Whoa! Whoa!” and jumping over any cat who got in his path.

He’s resting in a sun-puddle now, along with the rest of the feline household.

We humans, having breakfasted and taken on caffeine, are perhaps less wise.  I, obviously, am updating my blog; Steve is building bookshelves.  Yes, yes, you knew we’d figure out that we needed more bookshelves, despite the wealth of shelves built into the living room.

In fact, one of four we purchased has already gone into service as the Cookbook Bookshelf, sitting under the clock at the intersection of the living room and dining room.  The ginormous kitchen at the Old Digs had room for its own bookshelf; there is no such “extra” space in the current galley kitchen.

Two of the remaining bookshelves will replace one of the two bookshelves that my father built for my sixteenth birthday.  They were long and low, meant to fit under the eaves, and they were never meant to travel nearly so far, nor so long, as they have done.  The shelf that came to rest in my office is. . .’way too unsteady, given that its duty-list includes not only holding books but standing steady when a coon cat (or two) leaps to the top.

So! two nice folding bookshelves, to match the bookshelves that used to be under the windows in my office at the Old Digs will be replacing the old, unsteady bookshelf, which will find renewed purpose in the basement, where it will have a nice concrete wall to lean against.

Last week’s Writers’ Day Off was, of course, Friday, when we put on our Author Clothes and went downtown to the Children’s Book Cellar, to talk, and read, and sign books.  We had a nice turnout of about 10 people on what was a rainy, cold, occasionally thunder-y evening — included in the crowd were two women who’d driven up from Mount Holyoke (no mean feat in good weather) to attend.

As advertised, we talked:  about how we met, our first writing projects, how writing for newspapers ties in with what we do now, a bunch of other stuff, spinning off into the side-alleys and rejoining the main road down there — as one does.

We had fun; and I hope that was true for everyone who attended.

A note for those who ordered signed books:  We await the delivery of a case of books, which had not arrived by Friday night.  When that case arrives, we will sign and personalize books, and they will be cast onto the back of the wind.  Or the Postal System, whichever bids low.

This week’s Writers’ Day Off will be Tuesday.  The first item on the agenda is to vote, after which we will have breakfast out, and consider what else the weather will allow us to do on the thirty-eighth anniversary of Doing the Legal.

In writing news, I have deconstructed the manuscript into major narrative lines, in order to see the natural breaks more clearly.  This is service of weaving those lines together smoothly.  And also, yanno, finishing each line appropriately.  I’m not sure if we’ll have cascading dénouements or just go for one big BANG! across all storylines.  And they say writing a novel isn’t technical.

So, I think that’s it.  After I hit send, I’ll be removing the books from the old bookshelf, and shifting it elsewhere so the new bookshelves can be placed.  This will give the backbrain plenty of time — ahem! — to consider Weighty Matters of Fiction. 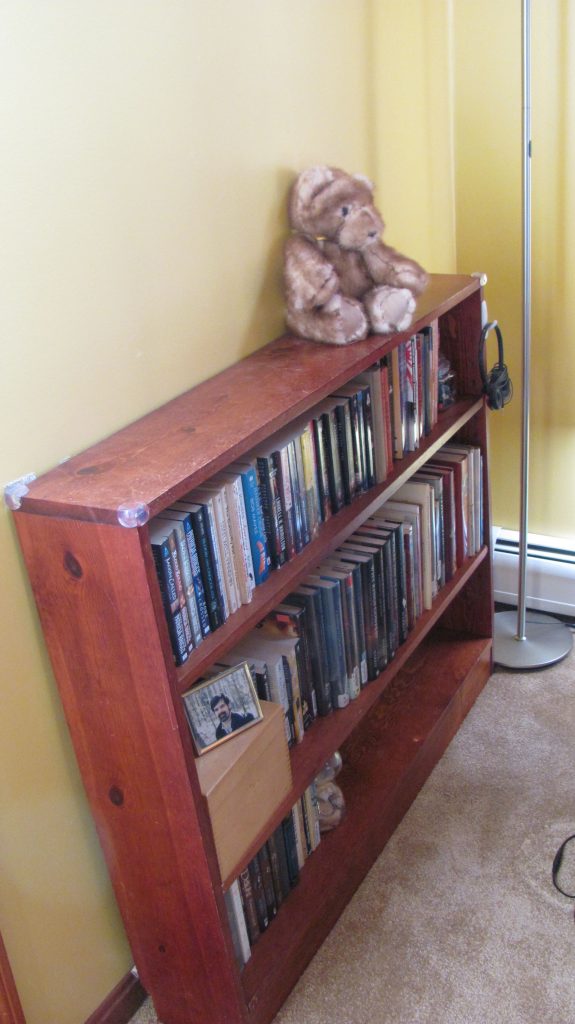