So, today, among other things, I went to City Hall to register to vote.

Frequent readers of this blog will recall that I thought I had registered to vote when I updated my driver’s license with the new address, because there was, on the back of the Official Department of Motor Vehicle Change of Address form a question accompanied by a ticky-box: DO YOU WANT TO REGISTER TO VOTE?  Y/N

I ticked off Y, thinking, in my naivete that this would mean that the DMV would kindly place my name on the rolls of registered voters in Waterville.

Come to find out, however, that this is merely a pleasantry, kind of like, “How are you?”  (“Would you like to register to vote?”  “Oh, you would?  Well, isn’t that nice?”) and you still have to go to City Hall in person, show your driver’s license with your correct address to the Registrar and be added to the voting rolls.

This is exactly what Steve did, yesterday, having stopped at City Hall to be certain that he was, in fact, registered to vote, and being told that, no, he wasn’t.

He brought this information home to me, and since I had errands to run today, I added “register to vote, REALLY” to my list.

This morning, therefore, I went to Day’s Jeweler’s to pick up my repaired necklace, whereupon I received a receipt, then I went across the street to City Hall, Steve joining me after dispatching his own errand at The Framemakers, and we assayed the City Clerk’s Office.  The Registrar had a citizen at her window, and, upon learning what was my mission, another clerk directed me to “go down the hall, to the left.  Absentee voting.”

We obediently went down the hall to the left, found two efficient looking women behind folding tables with computers and forms on them.  One was already engaged with a customer, but the other had me come forward and asked what she could do for me.

I told her that I wanted to register to vote, and handed her my driver’s license, which she looked at and then said, “I will need to see some identification.”

I blinked and pointed at the driver’s license.

“Yes, well, of course, that’s identification,” she clarified, “but I need something that proves you live at this address — an electric bill, a sewer bill — something like that.”

I was good.  I remained silent until I had counted to twelve, both ways, and then I said, “This is the dumbest thing I’ve ever heard.  I know you ALL do it, but honestly, I don’t carry my CMP bill around with me.  The driver’s license isn’t good enough?”

She shook her head.

I opened my purse, and pulled out the receipt from Day’s Jewelers, which had my name and address on it.

To her credit, she made it do, and I sit before you a registered voter in the City of Waterville.

Bear with me just a few lines longer while I belabor the point that Steve offered to the Registrar his driver’s license as proof of identity and address and it was accepted without question, without a demand for additional “verification.”

Possibly Steve looks more honest than I do.  Possibly the Registrar made a judgement call.  But, really, it ought to be as Easy As Possible to register to vote.  Yes, identification ought to be required and dodgy papers ought to be questioned.  But, honestly, a driver’s license ought to do the trick in a large percentage of cases.

In other news, we’re home now, having taken care of picking my necklace, and registering to vote, and mailing the corrected page proofs to Baen, and stopping at the grocery for bread and wine.

Time to go to work, I guess.

Here’s Sprite, being a desk dragon: 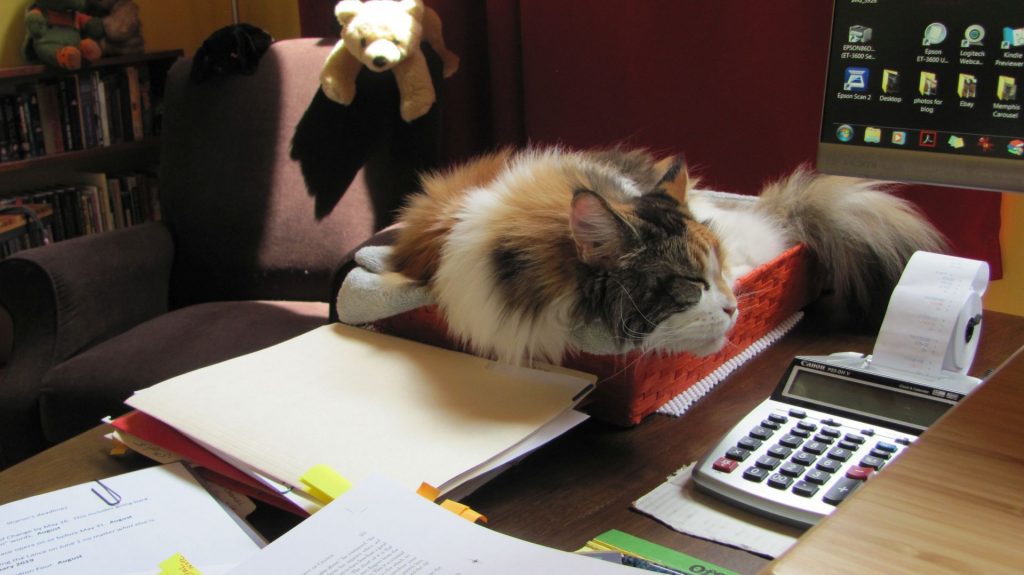