So, it’s been a Exciting! Few! Days! here at the Cat Farm and Confusion Factory.  Allow me to recap.

There were appointments with health care professionals in the beginning of the week for Steve; and in fact, he was at a doctor’s appointment on Thursday when I decided to vacuum the house, which surely needed it.  Got out the Dyson Cinetic Big Ball Animal Allergy vacuum (successor to the venerable Dyson Cyclone, I think it was called, which was not up to the contributions of three Maine Coon cats), started to vacuum the kitchen rug and — thud.  The brush bar stopped moving.

Said a few choice words.  Unplugged the vacuum, went down the hall to the change bottle and got a nickle, a dime, and a quarter, and returned to the scene of the crime.

Now, the former Dyson could be completely disassembled in a matter of minutes using only a dime.  The new Dyson, I quickly learned, is Far More Sophisticated.  Instead of two big, gaumy plastic screws holding the brush assembly in place, there were four teensy, tiny, star screws.  I searched for and eventually found the many-headed Philips screw driver, located a head small enough to do the job, and got to work.  Three of the screws came out — I won’t say easily — butt he fourth was in it for the ages, and wouldn’t budge.  Steve came home about then, and he couldn’t budge it, either, so I repaired to the internet and got in touch with Dyson.

Several emails later, it was determined that, indeed, the machine needed to be repaired, and I should take it to the nearest UPS Store, where it would be boxed up and sent to Dyson at no cost to me.  I was given a Repair Order Number.

I had physical therapy on Friday morning, so added the transport of the Dyson to UPS to the errand list.

As it happened, Steve elected to come with me on Friday, and it was he who escorted the Dyson to the UPS Store.  The woman on the desk signed into the Dyson webpage, found the work order, took the machine, matched up the number in my email from Dyson, and — that was it.  Our refurbed machine ought to be back home in 7-10 days, and in the meantime, thank ghod, we still do have the Dyson Cyclone, else we’d be awash in cat fur.

Today — continuing the theme of excitement — the mail included information for the 2018 National Carousel Association’s Convention.  Now, I have long wished to attend one of these conventions, which includes tours of private collections, visits to numerous carousels, and band organs, and whatnot, but — they’ve been in places like Kansas, and Michigan, and California.  And, also, inconveniently close to WorldCon.

This year’s convention?  Is in New England:  Rhode Island, Connecticut, Massachusetts.  The Convention Itself is from September 12 through September 16, but there’s a pre-convention warm-up on September 11, which includes four “extra” carousels, for a Grand Total of 15 carousels, 2 museums, and a private collection.

This is clearly a once-in-a-lifetime opportunity, and — yeah, I’m gonna try to figure out a way to do this thing.  Steve has allowed as how, though very cool, this is not something he thinks he wishes to partake of, so I’d be running solo.  On the other hand, I can drive, or take a Greyhound, to the Convention Headquarters in Connecticut.  There’s also a vendor room, but I’m not sure I want to schlepp the carousel books with me, on the off-chance three people will want to buy a set.

We’d only be back from WorldCon about a week by the time I’d have to head out again.  On the other hand, I wouldn’t be scheduled for panels, or, yanno — work — at the Carousel Convention, and — in theory, anyway — there wouldn’t be a short deadline breathing down our necks. . .

Yeah, I can do this.

Today’s blog post title brought to you by the Beatles, Ob-La-Di, Ob-La-Da.  Here’s your link. 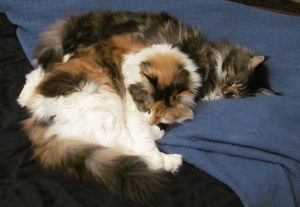 6 thoughts on “Desmond takes a trolley to the jewellers store; buys a twenty carat golden ring”