So, we got the January-June 2017 royalty statements yesterday.

Royalty statements always make for fascinating study — for values of “fascinating” that will make the eyes of any non-writer quickly glaze over.

The take-away from this batch of statements is that Dragon in Exile (June 2015) really did sell  (relatively) poorly.  No clue why, of course — bad title, unconvincing art, civil war, poor reviews, people were off dragons that year. . .could be anything.  For comparison, Alliance of Equals (July 2016) — the numbers for which we see for the first time in this batch of statements — sold more copies in its initial period than DiE has sold in its entire life.  Hmm.

We also see that DiE sold a total of 447 eArcs, while Alliance sold 1,678.  I do wonder if there’s a correlation between eArcs sold and first period sales, and how you’d go about measuring that. . .

The other really fascinating thing we learn from these royalty statements is that we’re selling the heck out of ebooks.  I think I first noticed in Mouse and Dragon’s initial period that the ebook sales had pushed it over the top — from break-even to royalty-earning — and that pattern seems to be holding for all subsequent titles.

For Sharon Lee titles — Carousel Tides, Carousel Sun, Carousel Seas — the pattern holds, but at a much more modest growth rate than the Liaden books.  Tides and Sun have earned out; Seas still owes the house money, though I expect it will earn out in another year or two.

So, anyway — now you know what I spent a chunk of my day on yesterday.

This morning, we took Steve to the dental surgeon for the last bit of that business.  We now move back to the reconstructive folks and hopefully this whole adventure will be behind him-and-us this year!  Maybe even before WorldCon.

Wow, wouldn’t that be something?

After the dentist, we stopped at the Barnes and Noble, since we were in Augusta, anyway, and signed stock, including eight! copies of Neogenesis, and after that?

We went for a ride — just a short ride, down to Lewiston and back up through Farmington.  Which reminds me that I have to look up where Wales, Maine, happens to lie.

This afternoon, I have a nap penciled in, then it’s back to Fifth of Five, until — Saturday, actually.  Some series of errors has conspired for an appointment-free day tomorrow.  Which is good, because next week is solid appointments.

Well, no.  I also have a picture of Belle, resting with her buddy, the rag tiger. 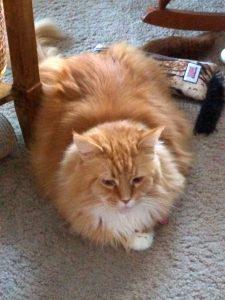 12 thoughts on “In Which Royalty Statements Have Landed”