Before we get started today, Management has asked me to make four announcements. Here they are:

One!  If you have been planning on ordering a personalized copy of Liaden Universe® novel Neogenesis, by Sharon Lee and Steve Miller, you have until tomorrow, Sunday, December 10 to make your order.  Here’s your link.

Two! “Block Party,” by Sharon Lee and Steve Miller will go live on Baen.com on Friday, December 15.  Mark your calendars.

Three!  You may now pre-order the ebook edition of Neogenesis from the Nook Store and the Kindle Store.

Adventures in Chemistry
We ran out of bread here at the Cat Farm and Confusion Factory, so this morning’s first priority was baking.  Sadly, it seems this batch ain’t gonna rise.  Not enough moisture, I think; I added more than called for in order to get the ingredients to the “sticky ball” stage of the thing, but it might not have been enough.

Snow Party
In other news, the roofers have finished doing their thing.  The house now has an awesome metal roof, and, in celebration, Central Maine is throwing a snowstorm this afternoon through tomorrow morning.

Do we know how to party or what?

Work Going Forward
Steve and I have three projects underway at the moment.

One is, of course, Fifth of Five aka Monkey Business.

The second is a short story destined for Insurgency, an anthology coming from ZNB in 2018.

The third project is editing Degrees of Separation: Adventures in the Liaden Universe® Number 27, an all-new, all-original novella (unless it hits the lower eaves of novel by the time the edits are done).  Degrees, it says here, is a story about Paris, about love, and about bread.  Our intention is to have it available as a widely-distributed echapbook,  and as a paper chapbook (though Amazon only) in mid to late January.

Now that the roofers are gone. . .
I can hang up my framed Letter of Nobility, certifying that Baroness Sharon Lee is a noble citizen of the sovereign micro-nation of Ladonia.  I had achieved my noble citizenship a few months back, to honor the memory of the late Dave Romm, himself a Baron of Ladonia, but had been behind in acquiring a proper frame.  Steve did this for me (you see how things work around here) and now the Letter may be put on display.

I think that catches us all up. 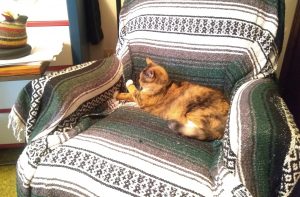 2 thoughts on “Waiting for the Snowstorm”