So, it’s been a scrambled couple weeks, what with doctor appointments, call-back doctor appointments, visits to the emergency room, and assorted Real Life Whatnot, which would not have been nearly as annoying, except that they took up the time left over from the various health thingies, leaving Very Limited Amounts of Time to do, yanno, work.

The spaces of time we did have lent themselves well to small projects, which is why Degrees of Separation is ready to be published, absent possible cover quotes from a colleague or two — oh, and sell copy.  Because of the above time constraints, I went with a pre-made cover this time (plug here for SelfPubBookCovers.com), which looks very well, indeed.

Today, I have done various chores, including cleaning the bathroom, and looked at the Calendar That Rules Us All.  January is already starting to fill up with Good Things, like Book Day (January 2) and book signing (January 13) and Chaotic Neutral things like taking Sprite to the vet’s for her annual checkup, but also with doctor’s appointments, which. . .Honest, our doctors are perfectly nice people, but I could do with seeing them a deal less.

However — and I hesitate to say this, lest I jinx it — it looks like I don’t have One Blessed Thing on the calendar until Book Day, January 2.

So!  The Plan is, after the Generator Guy is done doing the Generator’s Annual Exam, I will read the 60,000-ish words that now exist in the file labeled Fifth of Five, and (1) determine if it really is as awful as I think it is (note: occasionally, the current project is exactly that awful, but usually not. This is only the 60,000 word slump — that unique point in the narrative where the Critic in Your Head can point out that Everything You’ve Written on the WIP so far is Crap and that there’s not enough room left to finish the story.  It’s a Special Place, indeed.), and (2) come up with a Plan for moving forward.

And so that’s what’s going on here at the Cat Farm and Confusion Factory.  Business as usual, really 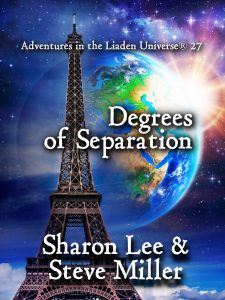 “No, no, having taken the decision to defend yourself–you did well. A man of peace, surprised at your lawful business, and, I make no doubt, exhausted from your labors this evening. Our friend, here, he had expected an easy strike, and now he will wake in the Watch House, with a headache, a fine to pay–and an account of himself to be made to his mistress that will, I expect, be very painful for him.”

6 thoughts on “The plan going, insofar as there is a plan…”