So, the Monday house hunt was kind of a bust.  The house I was pretty sure we were going to make an offer on revealed a Fatal Flaw; the second-most-likely house has now fallen under contract.  Of the remaining three houses on our carefully curated list, one needed a bulldozer, one needed a match, and one had lied in order to get a date.

There is one more house we had identified as possible, if not probable, and it’s on the calendar for our* inspection today.  . . .Actually, that’s a misleading statement.  There are several houses in the Waterville/Winslow megaplex that are (or say they are) one-floor, and/or have a master suite on the first floor. These houses are all priced in excess of $190,000 and — no.

*It may be that Steve will be performing this afternoon’s house inspection solo, as I have been and continue to be stupidly ill.  Tuesday I finally caved and went to the doctor, who sent me to the lab, and here I am, awaiting the results of cultures and whatnot, so that a treatment plan can be made.  Apparently, it’s hard to treat something if you don’t know what it is.

In Fountain Pen News, the Jaipur medium nip demonstrator pen and I have failed to reach An Accommodation, and it will be seeking a new position.  The Jaipur bold nib is a perfectly convenable pen, though the bold nib may be a Bit Much.  And the nameless little eyedropper pen that came with the two Jaipurs to keep them calm during shipping is undemanding, and quite pleasing to write with.  It’s currently filled with red ink because I was going to be doing some editing (see “stupidly ill” above), which, um, hasn’t quite happened yet.

Now, the pens I really REALLY like are the Pilot Metropolitans (I have two — purple leopard and white tiger.  A Theme!), but they take cartridges or a convertor, but the convertor that came with is, for this hopeful user, Impossible.  In a word, what I want are Pilot Metropolitans that I can fill with All The Colors of Ink!

So, last night, I ordered in my third Metropolitan (bronze lizard; we depart from the Theme) and a C-40 piston convertor, to be my Test Pen.  If all goes well, then I can order in a couple more convertors for the pens I already have and free myself from the tyranny of the plastic ink cartridge.

What with one thing and another (see “stupidly ill” above), progress has not been progressing on Fifth of Five.  Yesterday, I did sit in the comfy office chair with a pen and a pad of paper and wrote out some future scenes, so there’s at least some motion, even if it’s not exactly forward.

Oh!  I don’t believe I mentioned here that there is a new reading posted on Patreon, for subscribers only.  Here’s the link.

And, I think that’s all I’ve got, aside the news that it’s still raining.  The weatherbeans are claiming that we’ll get a couple day respite before the nor’easter hits, this weekend. 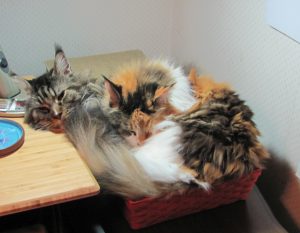 5 thoughts on “If it’s raining, it must be Thursday”