I finished the story I was working on, in first draft; it’s resting at the moment, titleless, and with a page of notes.  I’ll get back to it, oh, early or mid-October; plenty of time for a mid-November hand-in.  I’m anticipating that the finished story will be about 10,000 words.  Including, yanno, the title.

On the mundane side of life, Steve came home from Maryland; I celebrated my 65th birthday quietly, and managed to miss yoga two weeks in a row because Reasons.  I shall endeavor to do better this week.

Fifth of Five is moving along. . .slowly.  Clean-up books are hard.

I’ve gotten in a couple more fountain pens — demonstrator pens, so called, which take ink in right from the bottle via a piston mechanism — and some fun colored ink:  Noodler’s Borealis Black; Noodler’s Wampum Purple; Diamine Ancient Copper; Diamine Sherwood Green.  The company I bought the demonstrators from, included a bonus eyedropper pen — no piston, you fill the barrel via an eyedropper.

One of my new pens has a bold nib, which I’m tentatively preferring over what has been my go-to, the medium-nib Pilot Metropolitan.  The ink flow seems smoother — granted, this may be the difference in the inks; the Metropolitan uses a cartridge.

While I was ordering things in, I also committed a new coloring book:  The Art of Cursive, which looks like a lot of fun.

On Thursday, Steve and I drove three hours one way to the Burlington Mall in — surprise! — Burlington, Massachusetts, there to sign books at the BN (which is technically across from the Mall), and also to test drive a pair of Bose Hearphones.  Frequent auditors of this journal will recall that I’m starting to lose my hearing, as one apparently does, especially if one spent a Large-ish Chunk of one’s life, earphones in, typing copy from a Dictaphone.  Anyway. . .hearing aids not required at this point, says the last person who evaluated my hearing, right before the insurance companies decided they weren’t in the ear bidness.  However! More than a few studies now have indicated that people who have uncorrected hearing loss are more likely to develop dementia; and! that for the best results from hearing aids, one ought to start using an assist before the loss is so significant as to be disabling.

Thus, the Hearphones, which Bose is very careful to say are not hearing aids; they merely assist in direction hearing, and in blocking out background noise.

I did a test drive at the store with the trainer.  He asked me what I would be using them for, and we briefly discussed the fact that writers spend a lot of their time in bars, and I can no longer hear my tablemates in that setting.  So we did that scenario first — he pulled up a recording of a 250-people restaurant, and had me adjust the gain on the Hearphones, until I could hear him speaking directly to me.  I could still hear the background noise, if I concentrated, but it was a whole lot easier just to listen to him.

One of the weird things is that you also hear yourself, sorta like using a microphone. . . which, actually, I guess you are.

The trainer then asked if there was anything else, and I said, yes — movies, television.  I can’t hear dialog any more.

So, he pulled up a clip of The Theory of Everything, where Eddie Redmayne is explaining Life, the Universe, and Everything to the nice young lady, and I heard every word, clean and clear.

When the clip ended, the trainer asked how that had worked for me, and my answer was, “I watched Fantastic Beasts and I did not understand one word that man said during the whole movie!  This — I got everything.”

So, I brought the Hearphones home.  They are not cheap, and they are getting a rigorous field testing, because they can be taken back to a Bose with no penalty within 30 days.  And the Extra Good News Is? We don’t have to drive 6 hours round trip to take them back, if that proves necessary.  They can be returned to the Bose store in Kittery (which doesn’t sell the item, sigh), a mere hour-and-a-half down the road.

Today’s test was to be Fantastic Beasts, but, when I put on the Hearphones, I was told that the charge was dangerously low; which is a little scary because I charged them yesterday. It’s certainly possible that I forgot to turn them off after my tutorial session yesterday, but a device with a two hour charge isn’t going to be as useful as it might be.

In any case, after the Hearphones are charged — Fantastic Beasts.  If we pass Mr. Redmayne, then Steve and I will take ourselves out to a noisy bar, and I’ll see if I can hear him through the din.

Everybody have a good weekend. 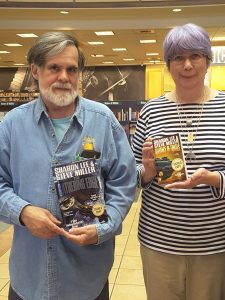 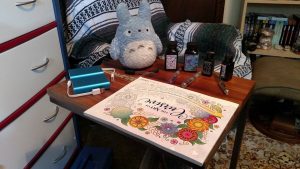 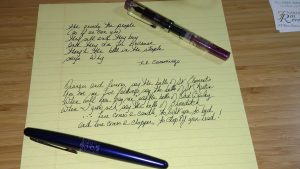 7 thoughts on “The weekly ketchup”