…that I did work today, which is notable, and now it is noted.

The work consisted of digging three holes, which isn’t as easy as you might think, those of you who unaccountably do not live on two acres of glacial moraine, or at the very least two acres of shale thinly covered with what we’ll call soil.

Why, you ask, was I moved to do work on a fine Maine morning when I ought to have been, um, writing?

Well, I’m glad you asked that question. Alert readers will recall that several days ago I acquired, in defiance of both the Lawn Guy’s Assistant, and the neighbor’s road-crossing, if not actually free-ranging chickens, plants for the Cat Garden, which has, through the direct intervention of said Forces of Nature more or less become a Weed Garden.

It had been hot and humid the last few days, not at all the sort of weather to encourage a sedentary and overweight author of more than middle years to go outside and dig holes in the garden.   So, I left the plants, in their pots, in approximately the locations I had chosen for their eventual homes.  I watered them each day, but they were looking sort of droopy and sad by this morning, so it was just very fortunate that today was gorgeously blue, and breezy, and dry, and of a temperature that someone who lives in Maine would find reasonable for July.

So! Three holes.  Not exactly in the locations previously chosen — did I mention we live on shale?  Also there are trees, and trees have roots.  Lots of roots.  No, really; look it up.

In between the rocks and roots, then — three holes.

One hole for the Cherry Pops Bee Balm which replaces the Murdered Bee Balm of yesteryear.  Bee balm attracts butterflies, hummingbirds, and, well, bees.  This particular sort claims to be deer and mildew resistant.

One hole for the Wishing Well Plantain Lily, aka Hosta Wishing Well.  This plant attracts hummingbirds and has a mounding habit, so I envision a Mountain of Hosta in my future.

The third and final hole — actually the first dug — was for the White Frost Hemerocallis — aka a day lily with a curly yellow trumpet not only bigger than my head, but damn’ near bigger than Trooper.  It is two feet high.  Who can say no to a two-foot-high day lily that has flowers the size of a coon cat?  It’s big enough to be sentient.  Indeed, I have some hope that it will be writing next year’s book.

I will also mention here that I have received and have been testing various bug repellents.  It is in my mind to go with the least application that is still effective.  To that end, I began today with the bug repellent bracelet, fully expecting that I would need to come inside and upgrade.

In this, I was disappointed.  I did hear one rather insistent buzz, but closer inspection revealed the author to be a hummingbird, who was apparently under the impression that he was paying me for these plantings, and I could pick the pace up a bit, if I didn’t mind.  Or, given hummingbirds, even if I did mind.

So, having now made the record complete, I believe I’ll. . . 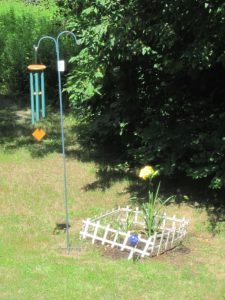 6 thoughts on “Let the record show…”