Got up early to make the trek to Skowhegan and Steve’s eye doctor.  Matters have stabilized, on that front, so — yay! stabilization!

Came home via the post office — whereby hangs a tale, which I will now tell to you.

My Formal White Tiger pen was listed as Out for Delivery by the USPS on Saturday, but did not arrive.  It is not, I will note here, Completely Unusual for the Saturday delivery-person to fail deliver packages. She simply leaves them for the regular weekday guy, because — I have no idea.  Packages hard, I guess.

So, this morning, I looked back to the site to see if indeed my pen was listed as “out for delivery” with the guy who actually does his job, but found instead a note that delivery had been attempted on Saturday, late afternoon, but nobody was home, so a note was left.

Which was…pure, unadulterated mud. First, we were home all day Saturday.  Second, we got our mail ‘way early, as we tend to do on Saturday.  Three, nobody from the post office came by the house during the late afternoon.  Four, no note was left.  Five, it wouldn’t have mattered if there was anyone at home anyway, because the package didn’t require a signature.

I called the post office and explained the situation.  As it happened, the allegation that a note had been left meant that the package was not out for delivery, but was waiting at the post office, until I called with instructions.  Which I would have never known — because no note — if I hadn’t looked at the website and discovered this, um, deceit.

So, anyway, Deirdre, who was on the desk when I called, was as helpful as one woman could possibly be.  She listened to the problem, said she would go find the package now, if I would let her put me on hold.  It took her twelve minutes to find it, but find it she did, and, at my instruction put it at the front desk so when I came to pick it up, it would be easy for whoever was then on to find.

That part went according to plan.

So!  Eye doctor, post office, grocery store, and so to home, eagerly anticipating the meal Steve had started in the slow cooker before we left home, except!

There had been a minor power outage while we were gone.  Too short for the generator to take note of and kick in, but more than long enough to reboot the slow cooker, which started a count-down-to-cooking, which meant that?

Dinner wasn’t ready when we got home, starving.

Speaking of the weather…today at the Cat Farm and Confusion Factory it is 64F and raining.  The plants I put in yesterday are significantly perkier than they were at planting, so I’d say that timing was just about right.

As I mentioned in another venue, yesterday’s writing session produced! a True Epiphany (or as a friend says, with a bow in the direction of his spellchecker — an Apostrophe).  Epiphanies often require a lot of frogging, rearranging of scenes, re-assessing motivations, and just what seems to be a whole lot of backward motion when all instincts are screaming, “I have to make words, dammit!”

Experience teaches us that True Epiphanies almost always deliver a stronger, better story, if the writer is willing to bite her tongue and do the work.  Also, if the writer decides not to do the work?  The Epiphany has a way of forcing its point, later, when the amount of necessary frogging leaps from a few pages to a hundred, and sleepless nights and alcohol abuse enter the equation.

So, I’ve got some unwriting to do today — not much, happily, because we caught this in plenty too much time.  I may even get a start on rewriting.

And the roads, they roll.

Oh, and the new pen is gorgeous.  I’m really going to enjoy having it with me at Confluence.

Here, have a picture of both fountain pens, all snug in their traveling wallet: 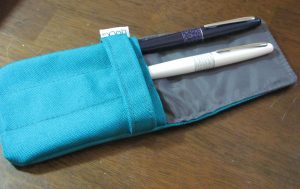 7 thoughts on “Errands done; and so to work”