So, yesterday, Steve and I journeyed to Augusta, where we meeted and greeted and talked and signed and importuned people who were on important errands and in general had a very good time being Authors on Display at Barnes and Noble.

We sold out of the Carousel Tides.  Apparently, if I could have somehow wandered the country, pressing the book into the hands of young women while whispering haunted carousel, I’d’ve had a bestseller on my hands.  We also sold a smattering of other books, including the new one!, and had a bunch of interesting conversations.  Only one person said “Ick!” (literally), when we told her the books were science fiction and fantasy, and several people took bookmarks/postcards for their sons, sons-in-laws.  Apparently, there are no daughters/daughters-in-law who read science fiction or fantasy.

Today, it’s back to work.  Steve is re-reading Neogenesis; I’ve just finished recording “The Beggar King,” which will be posted on Patreon on May 27, and, when I’m finished this blog post, I’ll meander out to the kitchen to put together a pot of lentil soup against the general gray-and-pouring-down-rain-ness of the day.

And so it goes.  We don’t have anything but writing a book on the professional calendar until August.  On the Real Life calendar, aside the ubiquitous health things, there’s the possibility of going to the Kite Festival at Bug Light Park on Saturday, and scheduling the installation of the new roof (metal this time), but nothing really pressing there, either.  A quiet-ish few months.  That’s not all bad.

Hope everyone is having a pleasant weekend. 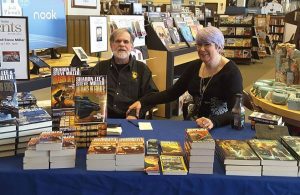 One thought on “Five Minutes of Fame”