Uncle Hugo is now accepting pre-orders for signed and/or personalized copies of The Gathering Edge, the 20th novel of the Liaden Universe® created by Sharon Lee and Steve Miller many, many years ago when they should have been doing more productive things.  Instructions are at the link.  It will help you to recall going in that “personalization” means “In addition to their names, the authors will write something you have specifically requested that they write in your book.”  It is also well to remember that the authors reserve the right to NOT include a particular personalization if it offendeth them for any reason. There is no appeal from the authors’ judgment in this.

Pre-orders for personalizations will be taken until April 1.

This is your link to pre-order signed and/or personalized copies from Uncle Hugo.

It is a fact little realized that Agent of Change, the very first Liaden novel written, was published as a Paperback Original by Del Rey Books in 1988.  It was followed, latter in 1988, and in late 1989 by Conflict of Honors and Carpe Diem, also Paperback Originals.

This is important for a couple of reasons.

Second! In all that time, and through all the various shufflings and republishings of the various Liaden novels the first three have never been published as single hardcovers.

Third! Baen will be celebrating Thirty Years of Liad starting with a hardcover reprinting — the very first hardcover printing! — of Agent of Change in the spring of 2018, with Conflict and Carpe to follow.

Watch the skies for more details.

We are finishing up the 23rd Adventure in the Liaden Universe® echapbook, Change Management, including reprint “Wise Child,” and original-to-this-chapbook “Street Cred,” plus an About This Book by the authors.  It will be available from The Usual Suspects before the first of March.  We of course, shout from the rooftops and dance in the streets when it is published.

The eArc of The Gathering Edge is now available from Baen ebooks, and only from Baen ebooks.  Frequent visitors to this blog will recall that there is a three-way wager regarding the eArc going on, between Belle, Sprite, and me.  Here are the particulars.  The eArc will be available until and only until, the hardcover goes on sale, in May.

Here’s your link to The Gathering Edge eArc. 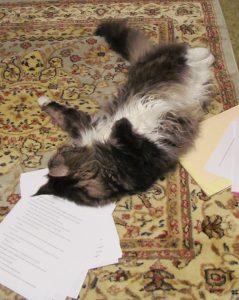