I believe that my topic is Yesterday.

Yesterday was Saturday.  It started annoyingly early, with a rustle-rustle-rustle so persistent that it woke me up.  The source was found to be Sprite, who, in a fit of boredom, one supposes, had knocked over the trashcan in my office, dragged out the packing balloons that had protected the light bulbs during their long journey from New Jersey to Maine, and was avidly licking them.  I don’t know what it is with the coon cats and plastic, but they love to lick it, and, unless it’s removed from their orbit, will do so until it shreds.

Stern Words were spoken.  The (shredded) balloons were removed.  The trashcan was righted, and I went into the kitchen to pour coffee.

Coffee in hand, I opened my mail and found myself on the receiving end of a download from a pirate site, which speaks to the advice that I shouldn’t operate heavy machinery, including the internet, until after I’ve finished the first cup of coffee.

Anyhow, this incident meant that I needed to deep-scan my computer for a virus check, which I of course did with the best of grace.  Loudly.

Steve made a cheese-and-turkey omelette for breakfast; after, we went out, to (1) pick up a prescription at the drug store, (2) check the post office box, (3) pick up several necessary items at the grocery store.

It came about that we needed a filleting knife to replace the one that came with me as part of my marriage portion, and which had achieved a separation from its handle.  So!  After stopping at the post office, and since we were on that side of town, it just made sense to zip over to KMart.

We arrived in the middle of someone loudly haranguing the person at the customer service station.  The first thing to greet my ears was, “You cannot lie to your customers.  One store says one thing, your store says something else.  One of you is lying.  In either case, you are in violation of contract law.  Do you want your company to be sued?  Or will you just DO YOUR JOB and. . .”

. . .you get the gist.  And!  He went on in this same vein, in a voice that could be heard to the far corners of the store, for the entire half-hour we were there.  Back in the sock section, I could barely think inside the racket.  God She knows how the poor woman trapped in customer managed to cope.

Anyhow, I managed to buy what I call “house socks” — men’s construction socks, with padded soles.  I wear them — surprise! — around the house in the winter time, since I prefer sock-foot to slipper-feet.

Since we were in KMart, and I had money in my pocket, I stopped by the jewelry counter to buy a silver chain, KMart having been, last I looked, a leading purveyor of cheap sterling silver chains.

A 28-inch silver chain at KMart had a list price of $149.95 (do what now?), but!  They were 70% off.  Which brought it all the way down to $45.  Which was a shade more than twice as much as I was willing to spend.  The saleswoman did her best, reminding me that I could put it on layaway, but I manged to leave the chain where it was, and got to the cash register to buy my socks just as the disgruntled gentleman left the store, phone glued to ear.

Steve did not find a filleting knife.

Back in the car we went to travel to the other side of town, where we picked up the winter extra cat food, and the prescription, and stopped at TJ Maxx, since it’s in the same shopping center as the Hannaford, still in search of the filleting knife.

Steve went back to kitchenware, and I stopped at the jewelry counter to chat with my acquaintance there.  As it happened, she had a 28-inch silver chain in stock.  For $19.99, which was very much more like it.  So, I achieved my silver chain.  Yay.

Steve did not find a filleting knife in TJ Maxx, either.

Onward to the grocery store, where we took on same, and Steve found a pair of knives that each might do the job of a filleting blade, and home again, where we had a light lunch and a long nap, before arising to go to work.

Work went well, Steve and I met for the evening meal, a glass of wine, and a chapter of A Night in the Lonesome October.  So, though the day started in aggravation, it wound down peacefully.

Today’s schedule includes answering a convention survey, the doing of laundry, and, naturally enough, more work on Neogenesis.  I have ahead of me a whole week with no lengthy real-world interruptions of any kind, so I hope to get a lot of words written in a forwarder direction.

“I live to be of use to you, Theo,” he said gently. “May one know the reason for these. . .arrangements?” 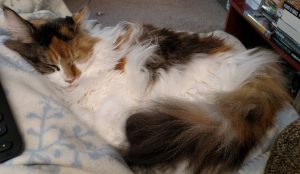