Faithful auditors of this blog will recall that Steve and I keep cats.  This is a long-standing habit.  When we moved in together, back in nineteen-aught-seventy-eight, Steve had a cat — the regal and intelligent plush-gray-and-white Arwen, who always seemed to be wearing an invisible tiara — and I had a cat — the brash, street-smart, orange-and-white Archie, who always seemed to have a pack of invisible cigarettes rolled up in the sleeve of his invisible t-shirt.

We have never since, in the 38 years we’ve been together, had less than two cats, and once had as many as five.  Usually, we try to keep an inventory of four, finding that the ability to mount two shifts benefits all.

This does not mean that I understand cats.

Take Thursday night, for instance.  I had been working in my office much of the day.  Sprite was curled in the red basket on my desk; Belle had for many hours been giving it her All from atop the file cabinet (what a worker that girl is!).  Trooper had been elsewhere, taking some time to himself, which we all need to do, occasionally.

So, anyway.  I was working, assisted ably, as described.  Darkness fell outside, and Trooper came into my office from wherever he’d been, voiced the chirp I think of as, “I’m here,” and proceeded to jump to the top of the printer. As he does.  The printer is behind me as I face the computer. Trooper and Sprite will often use it as an observation point from which to survey the pine trees and the birds who live in the pine trees.  Sometimes, they sit up there for hours.

Which is what I expected Trooper to do.  However, Trooper is an athlete, and he had previously discovered that he could leap from the top of the printer to the top of the file cabinet, and settle in on the comfy fleece blanket.

Recall that this had been Belle’s position for some hours at this point.  In fact, she is perfectly visible, being a rather large cat herself, from the vantage of the printer.

Despite this, Trooper makes the leap.

Belle screams, and flings backward, feet up, out, and armed.

Trooper skids off the blanket onto the secondary file cabinet, where there is, yes, a pile of filing, waiting to be done.

Trooper yells.  Belle keeps screaming.  The writer, who had been writing, and thus not really Paying Attention, is utterly taken by surprise, leaps to her feet, and adds her bit to the music.

Trooper flies off the top of the file cabinet, and tears off down the hall.

Belle leaps from the file cabinet to the bookcase, still screaming, and runs after him.

Sprite blinks up from the red basket and kind of mooches to the edge of the desk, peering sleepily out the office door, and down the hall.

The writer, who has by now realized that all of the filing is behind the file cabinets, leans her head on her arm and starts cussing, while Steve, who has heard all of this commotion without context,  comes in to find out what happened.

In the meantime, Trooper and Belle are in the hallway, wearing Very Big Eyes.  In a surprise turnabout, it is Sprite who some minutes later returns to the office, and takes the lazy route to the top of the file cabinet, sniffing carefully the entire time.  She finally leaves by the same route, and apparently reports to Belle and Trooper that the Monsters are no longer in residence.

Eventually, they return, and take up positions on the new rug, to bathe.

The writer saves her work, closes the file, and calls it a night.

On that head, at least, my work here is done. 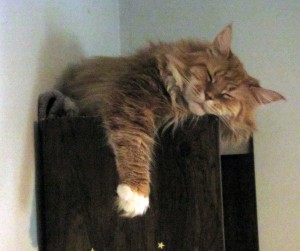 5 thoughts on “Life with cats”