So, I finished the unweaving and reweaving of the 67,000ish words of Neogeneis, which includes several thousand words of bridge-work, printed it out, and for the last couple days, the coon cats and I have been staked out on the couch, reading for continuity, sense, missing words/scenes, and inappropriate underlining (which become itals in the finished book).  We brought to this task, the Last Red Pen in the house, which was found to be dry, whereupon a blue pen was Pressed Into Service;  three stacks of sticky tabs:  yellow, purple, blue; a set of punctuation tabs; and the current working yellow pad.

The score thus far:  With 264 pages completed, and just 30 pages left to go, the yellow sticky tabs are no more; and a little better than half of the purple ones have been expended.  It’s a toss-up if I’ll have to tap the blue ones before the end of the story as it now stands.  Either way, sticky tabs and red pens are on the To Buy list.

The story hangs together as such, which is a relief — there’s really nothing more frustrating than a Better Idea that turns out, in practice, to not have been a good idea.

Given the rhythm of the piece already in hand, though, it really does seem as if we’re only a little past half-done.  So, we’re looking at a finished manuscript of 125/135,000 words, without “extras” such as lexicon or timeline.

Today, after I finish the last 30 pages, I will retire to my desktop, and start inputting the edits/correx/expansions.  Then, I can get to work on the scenes which are forced (duly noted on the yellow pad, and, err, other bits of scrap paper (hey! I don’t bring the yellow pad to dinner with me; unfortunately, I do bring the story)).

And that’s what’s been going on around the Cat Farm and Confusion Factory.

In other news, after a brief remission, the cold has come back with a vengeance and an Attitude.  Ginger/lemon tea with honey will definitely be my beverage of choice, today.

I want to thank everyone who weighed in with recommendations re Niagara Falls.  I’ve done a little bit of research based on your data, and — yeah, the Canadian side really does seem like the place to be.  We’ll be there in early-mid August (if all goes well), which I guess is the middle of tourist season — and will be a change for us.  Our wedding anniversary is the second most frequent reason for us to travel, and that’s in November, after many Sights are closed for the season.  Being at a tourist attraction when everything is open will be exciting.

And now — back to work.  The coon cats and I will be on the couch. 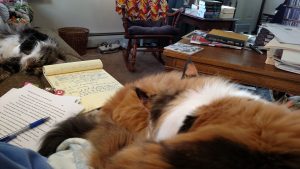 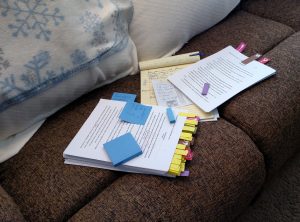 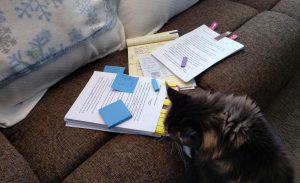 6 thoughts on “In which the writer is working”