Those following along at home will recall that, last week, it was discovered by an Alert Reader that Amazon had taken The Crystal Variation, an omnibus of novels Crystal Soldier, Crystal Dragon, and Balance of Trade, by Sharon Lee and Steve Miller, published by Baen Books off sale.  We alerted Baen.  Baen’s Speaker To Amazon found that Amazon had identified 144 “spelling errors.”  Until those “spelling errors” were corrected the book could not be sold.

Baen forwarded the list to us, and we identified — wait for it — THREE incidences of Actual Misspelled Words (the rest were made-up scifi words, and most of them were “cermacrete”), four instances of missing commas (which Amazon had not pinpointed as errors), and one instance of two words that were smushed together.

Yeah, that’s it.  Amazon pulled our omnibus, without notice, for containing three spelling errors across a 1200-page book.

The Crystal Variation is now back on sale at Amazon, thanks to speedy work on Baen’s part, for getting those errors fixed, and the book re-up-loaded in record time.

Meanwhile, in another part of the forest, Amazon had likewise taken Courier Run, Adventures in the Liaden Universe® Number 18,  by Sharon Lee and Steve Miller, published by Pinbeam Books (aka Sharon Lee and Steve Miller) off-sale, without warning, for four spelling errors and two bad line breaks. These errors were represented as having been reported by a reader who found them “distracting.”

Yesterday, I fixed the two misspellings, recompiled the book and re-uploaded it to Amazon.

This morning, I have in my mailbox a communication from Amazon, stating that copyright is important to them, and that I must, in five days, provide proof that I have the right to publish Courier Run, Adventures in the Liaden Universe® Number 18.  The acceptable proofs are:

As of this writing, I believe that Amazon will sell you a copy of Courier Run, Adventures in the Liaden Universe® Number 18.  There is a Quality Issues Reported Hazard Triangle just below the title.  The drop-down for that reads:

Customers reported Quality Issues with this eBook.  This eBook has
TYPOS
The publisher has been notified to correct these issues.

. . .so I’m guessing it’s not the amended file they’re selling.

In less-fraught news, Steve and I took yesterday off to travel into Waterville to attend the Very First Screening of “Kubo and the Two Strings.”  This is a very beautiful movie (we saw the 2-D version); the animation was amazing. The story itself is short on plot, though the writers/directors have an Absolute Mastery of Emotional Manipulation.  I recommend it for the animation alone, and for the overall sweetness of tone.  I came away from the movie feeling (briefly) peaceful and content.  So — C+.

For those who have been following the New Box Project.  I offer the following short photo essay: 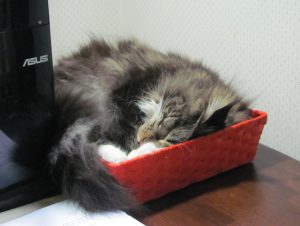 Sprite is thinking about the new box: 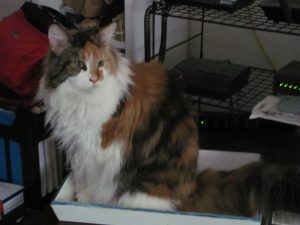 . . .which has already received the Belle Seal of Approval: 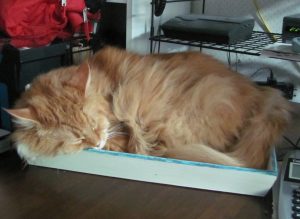 Today, I work.  And probably do the laundry, because the life of a writer is unremittingly glamorous.

Everybody have a good weekend!

13 thoughts on “The Action in the Amazon Continues”