As I write this, Alliance of Equals has 195 reader reviews on Amazon; a slim five reviews from 200.  Can we make the goal?  Heck, can we crack the goal?  Only you can make a difference.

So, yesterday, I removed the (pieces of the) wicker cat basket from the desk to the trash can.  A couple hours later, Trooper Discovered that it was missing.  He did not, however, call in another coon cat to act as witness.  I assumed that he was giving the basket an opportunity to return on its own.

His patience was rewarded later in the day, when Steve arrived home from errand-running with a Very Classy shallow wooden box and/or serving tray.  I placed it on my desk in the place where the wicker basket had been, and placed a towel in it.

Here’s the Box, awaiting a tenant: 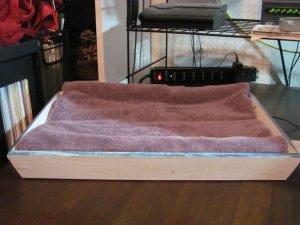 The Box sat, bereft, for a couple of hours, while Trooper helped me write from his Usual Position: 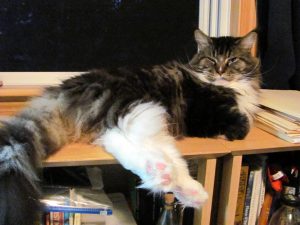 After I had finished work for the day, he walked across the desk, as is his habit, and discovered the New Box.

There commenced about six minutes of Intense Study, before a Theory was formed: 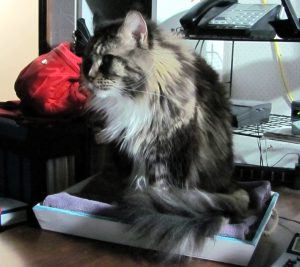 I anticipate more Inspection and Theorizing today before a Final Verdict is returned.  Color me Cautiously Optimistic.

Progress on Book the Next is going to be difficult to quantify by word count for the next while.  Word count is a blunt instrument at best, but it does give people who are not down here among the commas and the semicolons some feeling of Progress.

Right now, as a result of the Structure Wars, there is more novel written than appears in the master file.  Those words will eventually come home to momma, but for now, they’re rusticating over there in a waiting file.  For my own peace of mind, I don’t want to count them until they’re woven in.

All of which boils down to: No word counts for you, for the foreseeable future.

I will be posting snippets, however, just to let you know that Work Is Going Forward.

“One usually pursues the weather in such moments,” he commented.  “However, it has been so much the same lately, there is scarcely anything to be said.”

3 thoughts on “In which Rolanni is up before breakfast”