So!  Book the Next has shrunk again, as last night I Officially Removed that questionable 5,652 words, and placed it in a file named “Five of 5.”

This brings the word count for Book the Next right down to 32,777.  As a colleague said, “It would be so much easier, if writing a novel were only about stringing words together until you have enough.”

One more question from the Roll Call:  Will there be a Jethri and Tan Sim story?

…one assumes that this is not a request for slash, but for a novel, and the answer is — Don’t know.  It’s not on the current list, but we’re pretty sure to have another list, sometime in future.  What we chose to write about is predicated on a number of factors, the most important of which is — What do we feel like writing?  As people frequently mention, it takes us a long time to write a book — far too long, in fact, to live with characters we dislike or a story we didn’t really want to write.

Several people in a number of venues have asked where they can find more of Tolly Jones.  This is pursuant to yesterday’s posting of “Wise Child” (which is here, if you missed it).  Tolly, of course, makes an appearance in Dragon in Exile, and is also present in Alliance of Equals and! Book the Next.

There is some curiosity about Where Disian Came From.  First I heard of her was in Book the Next, when Tolly casually said something, and I was like, “Wait, what?”

Folks also want to know the “rest” of Disian’s story — which, she having arrived fully formed, so to speak, I happen to know!   Sorta.  What I don’t know yet is where that story belongs.  And, no (to forestall a frequent variation on a theme) I won’t just tell you.  Just telling you is not a story, but it very well may ruin the story, in that, having just told you, I’ll be bored, and won’t write it.

Writers are twisty wights, no getting around it.

Steve and I have had a go at putting together a blog tour for Alliance, and our first stop was at YA Authors You Never Heard Of.

He’d asked Disian, once, how moving through Jump looked to her. And she’d waxed rhapsodic enough that he’d decided right then and there that a man might have no better use of his time than to seek out the Uncle and offer to do whatever it took, so long as he ended up downloaded as the main brain of a spaceship. 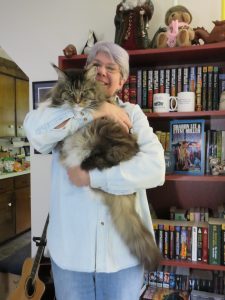