No checks in today’s mail, either.

*looks at pile of bills on desk*

This is going to be interesting.

Moving on — Answers to questions from the Roll Call!

*Er, no, I actually wouldn’t move to Liad, if I could.  For one thing, as a non-Liaden, I would be beneath most people’s notice, not to say contempt, except if I managed to insult somebody, which the odds are good that I’d do so within ten minutes of achieving the Port.  I’d rather go someplace where my life expectancy would be longer than ten minutes.

*The Gathering Edge will not be published until May 2017, that is correct.  In the larger scheme of things in publishing, that’s really hardly any time at all.  No, I’m afraid we can’t write much faster than we already do.

I learned that orange sticks (aka “cuticle shapers”) are now made out of plastic.  They used to be made out of orange wood, but apparently not anymore.

I learned that I can prop my tablet up on the little ledge built into the treadmill at the gym and read as I walk.  And! I don’t have to worry about walking into a wall, when I do.

I learned that Microsoft thinks that a $1,000 tablet can “replace” my laptop, which costs 1/3 of that amount.  Research indicates that it does neither the dishes nor laundry, so I fail to see the advantage.

I also learned that my fingers — my fingers, not my wrists, which is usually the case — apparently took a beating yesterday, and if I’m a Schmott Guy, which really isn’t the way to bet, I’ll give them a break today.

Do I have any Hollywood historians here, or perhaps a Mae West aficionado?  I was wondering if she actually needed the stick she often had with her, or if it was only a fashion accessory.

Don’t forget that Steve and I will be at Flights of Fantasy in Albany, New York on Tuesday, July 5 to celebrate Alliance of Equals’ book day!  Be there or be somewhere else!

In other news, I wrote about 2,200 words yesterday, for a net gain to the manuscript of. . .33 words.  I think that we are now at an end of Backward Growth, and will be proceeding from here on in a forwarder direction.

You heard it here, first.

“I believe it wished me to know that Theo might be in a pickle.”

Miri snorted a half-laugh, and he smiled. 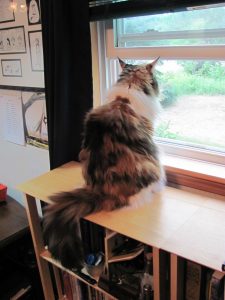 2 thoughts on “I can climb the highest mountain; I can cross the widest sea”