So we had a nice day.  Steve had an appointment with the eye specialist down Portland in the afternoon, so we took off after the mail arrived (the check is, as of this writing, still in the mail), and went down to Old Orchard Beach.  The sea was turquoise, the tide was high, it was windy on the beach and warm in the town.

Really, it was a Perfect Day.  The air was clear, the sun was bright, the sky was blue with only a very few wispy white clouds, for effect.  There were a hundred  people on the beach, and more buying pizza and French fries.  I dunno how many were in the arcade, which was open.  It was like being at Archers Beach during the Early Season, except for the fact that the amusement park wasn’t open.

We drove down to Pine Point, as is our habit, and!  you might ask how clear the air was today.  And I might answer, we could see Mount Washington from Pine Point.  I have pictures, but I’m not digging them out of the camera tonight.

In good time, we motored on up to Portland, where we paused in the parking lot to absorb the news of Prince’s death.

Considerably shaken, we went into the gigormous eye clinic, where Steve did business with the eye specialist.

We then drove to South Portland, the doctor’s appointment having been set at an awkward hour, in search of the midday (now late afternoon) meal.  We decided to try 5 Guys, since we were both 5 Guys virgins.  I had the grilled veggies with cheese; Steve had the small cheeseburger.  We both declared ourselves satisfied with the meal, but dissatisfied with the level of the music.  It was like being in a club.  Good music, but it could’ve stood going down a couple of decibels.

Our business finished in the South, we headed north via the back roads, and so saw the very enormous full moon rise over the hills.

We’re home now, the windows are open; I have reversed the polarity on the ceiling fan in my office and turned it on.

And now it’s time to have a glass of wine and a light meal.  And so, to bed. 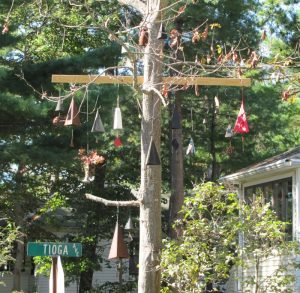