So, this morning was the hospital’s breakfast and gala celebration of their volunteer workers.  It is, I’m told, National Volunteer Month, so if you know someone who volunteers at a hospital, or the library, or the church, or at school — it is appropriate to thank them for their service.

Inland Hospital’s thank-you was very pleasant.  There were about seventy of us present, and each had a made-to-order omelette, home fries, danish, and fruit salad, with beverages of our choice.  We had the Kennebec Chordsmen for entertainment while we ate, and I had occasion once again to be grateful to my grandmothers for taking me to All Of Those Concerts in the Parks when I was just a chitlin, so that I had more than a passing acquaintance with the Songs of My People.

After breakfast and entertainment, there was speechifying by the president, who honored our Volunteer of the Year. Then the volunteer coordinators were up, to give out certificates and service stars (I was there as a guest, having only served a few months so far).  Throughout it all was the drawing for and bestowing of door prizes.  All in all, as I said, a very pleasant affair, and also useful, as I got to put the names and faces of my colleagues together.

I want to talk a little bit about clothes.

Because, see, when I was dressing for the nice affair described above, I naturally reached for respectful clothes.  I therefore put on a yellow oxford cloth shirt (men’s tall medium, LL Bean); a pair of khakis (women’s tall 18, Eddie Bauer); a black leather vest (Penney’s, I think, back a hundred years ago); striped socks, naturally, and a pair of Dansko lace-up oxfords (which I just found out they don’t make anymore, dammit).  And, no — this is not a story about how I was vilified at the affair for wearing inappropriate clothes.  No one said anything about my clothes, though a couple of people admired my hair.

People who have been following along here for a while, and those of you who have seen me in person will have noted A Thing about me.  Most people, in fact, notice this Thing about me immediately, and often comment upon it, far predating the purple hair, and with…significantly less enthusiasm.  In fact, most people, when commenting on my Thing…sound a little accusatory.

I’m six foot tall (just under 2 meters, for those who measure by tens).  Perhaps not quite so tall anymore (doctors differ), but still — tall for a woman.  And most especially tall for an Older Woman in Maine.

Now, the thing about the Thing?  Is that I’ve been damn’ near six foot tall since I was twelve.  I came from a family of tall people and I am, irony being what it is, the shortest person in my family group.  I remember shopping for clothes with my mother — proper girl clothes, you understand, this was the 1960s.  The sleeves would be short — “Roll them up,” said my mother — the skirts were too short — “Bend your knees,” said my mother — the shirt tails too short — “Don’t lift your arms,” said my mother.  Most of my clothes were, yes, home-made, and for a long while after I grew up and moved out, I made my own clothes.  Which solved that problem, sort of.

The thing about the Thing, though?  Is that I liked wearing jeans, and invariably did so on my own time.  On one occasion — I was 14 and had walked up to the local shopping center and was browsing the women’s section in the local, I dunno, was it Kmart, then, or still Kresge’s?  Anyhow, a saleswoman approached me — I was wearing jeans and a flannel shirt — and told me that I was in the wrong section, and I needed to leave.  The one thing that does give me away, if that’s even the phrase I want, is my voice, and she knew she’d made a mistake when I asked her for a date, but that didn’t stop her from calling the security guard.

Who didn’t throw me out, but who did give me a lecture about not being flip to my elders.

When it became possible for women to be seen in the workplace wearing pants, I enthusiastically adopted the practice and never looked back.

And there’s when the trouble really started.

I was tall.  At that point in my life, I was slender.  I wore my hair shortish.  I favored tailored suits and what are these days called “boyfriend” jeans.  I also wore makeup and earrings.

And, nine times out of ten, twenty times out of twenty-one, fifty out of fifty-one, I was addressed as “sir,” by almost everyone who stood behind any kind of counter, or who had to do with putting gas in my car, or almost anything else.  At one point — this was in the late 1970s, now — Steve and I walked, hand-in-hand, into a mall jewelry store.  One clerk turned away from us.  Another — possibly the manager — bravely stepped up to ask if he could help, “you gentlemen.”

Some years later, when we had moved to Maine — and I had long realized that wearing men’s clothes meant I could find sleeves that were long enough, and jeans that were long enough, and skirts were no longer an issue — I worked the night shift at the daily paper.  My shift ended at midnight.  Steve would often meet me after work, and we’d walk the long way home, across the Concourse, so called, which, at that time of night was the territory of drunks and bikers — not necessarily the same population, but there was an overlap.

One night, we were walking by a group of night-time livers, hand in hand, as we usually go, and someone in the shadows spat, and someone else said, “Fags.”

Steve turned around, still holding my hand, and said, “Hey, man, you insulted my wife.”

“Wife?” said one guy, maybe a little truculent, while his buddy put a hand on his shoulder and said, “Sorry, man.  Nice lookin’ woman.”

And so we passed on.

Always — and I mean, To This Day — when I walk into a public ladies room, and there is someone there before me — they do a double-take.  Always.  Nowadays, the purple hair sometimes smooths the alarm away into a smile, “I love your hair…”  But I gotta tell you, I just love that start of fear that I generate, just by being who I am.

But here’s the thing about my Thing — obviously people are not very observant.  Certainly, the normal joe or joan on the street can’t be trusted to correctly identify any random passer-by by their gender.

And, even if they could — so what? 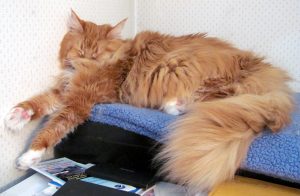 Today’s blog title brought to you by, “My Darlin’ Clementine,” which is one of the Songs of My People.

11 thoughts on “Herring boxes without topses sandals were for Clementine”