Yesterday, it was sunny and warm (for values of warm that include 38F/3C and a sharp wind off the harbor), so we got in Kineo and I drove us to Camden, where we walked around downtown, shopped (I bought a pair of earrings!  They’re pretty!), and ate a spur-of-the-moment lunch of spinach-and-feta quiche chased with hibiscus-and-ginger iced tea at Zoot, which is, as the name of course implies, a coffee shop.

On our way out from lunch, we met a dog from the local animal shelter, who was being walked by a volunteer.  The dog — a very tall beagle-ish looking fellow — was wearing a bright orange dog coat with ADOPT ME on it.

What a great idea!  He was getting quite a bit of attention from the various walkers-about-town,  which was only to be expected, of course, because he was a very handsome dog who was interested in sharing.  For instance, he immediately identified the bag Steve was carrying (containing a piece of pumpkin-orange cake, which we intended for a snack, later in the day) as something that he would be pleased to share.  He managed to be interested without being rude, and when it was made clear that Steve was not as interested in sharing as dog was, dog gave it up with good grace.

From Camden, we should have gone home, but we’d got out into the sunshine and were reluctant to go back.  So!  We went to Belfast, up Route 1, where we visited the justly famous Belfast Co-op.  Steve bought sesame crisps.  I bought dark chocolate covered cranberries and dark chocolate covered ginger (and I poured them out of their bags into the same jar when we got home, because that’s just how Wild and Crazy I am); Steve bought a piece of bundt cake, and I bought a four-pack of eight-grain bagels.

After the co-op, we should have gone home, but. . .I drove us across the bay, through Searsport and Stockton Springs, and took the left so we wound up in Bangor.  From Bangor, we went right, across the river (after almost getting rear-ended by a young lady who was going 40 in a 25-mile zone, around a blind corner, where, immediately on the other side, I was stopped while someone backed out of their parking place), and drove almost into Ellsworth, before taking the right again, on to route 32? 37? to Bucksport, went over the Penobscot Narrows Bridge and Observatory, and so back to Belfast and, finally, with the sun going down, to home.

It was a fine day.

Today, it snowed about six inches, big, wet, sloppy flakes that will likely melt tomorrow.  It has also been a fine day; writing has been accomplished and several pieces of business are being addressed.  But now it’s time to call it a day and have some lunch with my lovely and talented co-conspirator. 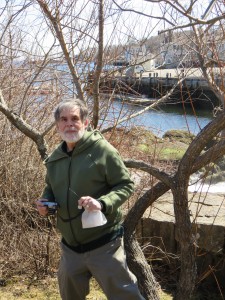 5 thoughts on “Springtime in New England”