Yesterday, we caucused.  It was, IMHO, a disorganized mess run by people who didn’t think that Any Explanation of the process was necessary.  It got the job done, eventually, and thank ghod.  Our caucus gave the nod to Bernie Sanders, as, I learn this morning, did the majority of Maine caucuses.

One of the pieces of information that was shared during yesterday’s meeting was that reports from the South indicate that three times as many Republicans are voting (via primary and caucus) as are Democrats.  One wonders if this is a result of the gerrymandering Republicans have done over the last few years, along with the restrictions on voting times for populations which are known to vote Democrat, or, if, yanno, Democrats really are that complacent.

In Maine, we have reports of people standing in lines for three hours outside the caucus site in Portland, and of high turnouts in many towns.  Which is good, but New England can’t balance the entire South.

If your primary or caucus is still in the future, please vote.  Thanks.

This morning, I played pickleball and took my first injury:  a floor burn on my right knee, result of diving for a ball — and continuing in a floorward direction, after I had missed.

I was also, for one game, fourth in a team three women who “play the net,” a philosophy of pickleball of which I had been entirely unaware until this morning.

“Why are you standing all the way back there?” my partner wanted to know.  “Don’t you want to play the net?”

“The *experts* all play the net.  When you watch pickleball, you see that, don’t you?”

“Ah, no.  I don’t.  I don’t watch pickleball, except when I’m here. Many of my partners have had Strong Opinions about where I should stand, no one has suggested I should ‘play the net.’ And, honestly, I don’t aspire to be an Expert Pickleball Player.  I want to have fun and give good game.  Those are my goals.”

My next game, with a different partner and different opponents, we all played mid-court and long, which is what I’ve more or less become used to doing.

So!  I’m home now, having played five games of pickleball.  I need to ice my knee, I suppose, in the interests of Proactiveness, and then I need to sort some laundry before it overflows the hamper and consumes the bathroom.

Hope y’all are having a pleasant Monday.

Today’s blog title brought to you by Pete Seeger by way of Bruce Springsteen:  Oh, Mary, Don’t you Weep.  Here’s your link. 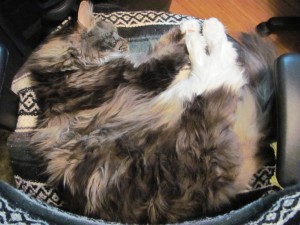