The question is:  how much world building do you do before starting a new series or tangent? I’m working on my first novel and keep finding I have to backtrack to explain assumptions.

There are a couple of things going on in this question, so I’ll deal with the easiest one first:  It’s Perfectly OK to have to go back and fix/add stuff in/to your story.  We all do it.  We all get stuff wrong in the first draft.  That’s why most of us (I have had conversations with writers who say they write perfectly and never redraft.  Perhaps they do.) do multiple, or rolling, drafts.

As to how much world building I/we do before starting a new series…my first inclination is to say, “None; the characters tell me what I need to know, when I need to know it.”

While that’s true, it’s probably not true enough.  There are certain basic decisions you need to make before you start writing a story.

You should know what kind of story you’re writing:  romance, science fiction, fantasy, mystery, literary, &c, &c.  Knowing your genre will narrow what kind of world you’re allowed to play in.  Yes, there are crossovers.  The Liaden stories cross genres six ways from Thursday, but they are rooted in the traditions of science fiction.

Now, this business with the characters telling me/us what we need to know?  That’s true.  But the reason it’s true is that Steve and I tend to “meet” the characters who will be living in any particular story first.  That’s How We Do It.  Other writers think about the world/society first, and then they think about what kind of people would live in that world, and what kind of trouble they’d get into, what their assumptions are about their world, and if they’re right, wrong, or yes.

One of my favorite stories about world building comes from Janet Kagan.  She’d determined to write Hellspark, a book about language, and how it shapes society, thought, and prejudice; about what sentience looks like.  She worked hard on the kinesics of the various characters and cultures, kinesics being a plot-point, and she worked hard on her main character, Tocohl, who was a master linguist able to get around in multiple cultures because of her mastery of language and body language.  She wanted, particularly, for none of the cultures depicted in Hellspark to be “ours.”

And she was just about to hand the book in when she realized something.

In her book about alien kinesics?

Well, she tore the book apart to find and fix each of those incidences.  As one would, of course.

Now, that’s not the story of a failure — the error was caught in time.

But it is a cautionary tale to all of us, to think about what we’re doing in the world and society we’re building, and to question the easy answers that come from our assumptions and a lifetime of experience in what we like to call the real world.

Ask yourself:  What would a kid who lives in a closed environment where germs and dirt would cause a lot of problems, cuss by?  Might he use, mud, or dirt?  Supposing this closed environment that must be kept clean — how is that done?  Who does it?  What’s it called, the clean-up run?  It’s a basic task, keeping the ship clean, a survival task — is it therefore high-value?  Is the Garbage Man the ranking crewman, revered for keeping the ship spotless and the crew alive?  Or is Stinks a low-level task relegated to the junior-most?  It could go either way, right?  Just because we don’t happen to revere sanitation workers in so-called real life doesn’t mean that’s Natural Order.

Once you’ve made your choice — be consistent.  Pay attention.  Daydream about what your choices mean, down the story-road, what interesting developments might spring from them.

. . .but you can do most of that while you’re writing, see?  So long as you remember that going back and “fixing” things is a natural part of the process of storytelling. 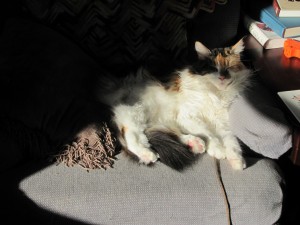 5 thoughts on “This, and all the world”