This morning, we got up early (for the third morning in a row.  Yes, I have a call in to the Auditing Department.), in order to adorn Princess Jasmine Sprite in her travel regalia — the sparkly pink-and-purple leash, the red harness, the royal ladybug ruff, this morning augmented by the sable fleece blanket.

Her Highness had, sadly, forgotten the appointment she had directed Staff to make with her physician, and, as I gathered her up in my arms and started for the kitchen door, she made one loud, anguished cry that sounded for all the world like, “Dad!”

We settled in the passenger side, and she managed to work herself into quite a state by the time we reached her physician’s office, where she immediately transformed herself into a Frozen Not-There Cat for the duration of the physical.

She is, as we suspected, Perfectly Healthy, weighing just a whisker (almost literally; coon cat whiskers are. . .not insubstantial) under 15 pounds.  She received her two-year distemper vaccination and was given a chip, which puts her in the vanguard of Feline Technology at the Cat Farm.

The mail had been delivered at home by the time we returned.  The mail consisting of two books, and! my new waterproof, lined, winter gloves from Duluth Trading Company.  I am remiss in reporting that my slip arrived yesterday, as did our Yule gift to each other — a case of mixed wines from nakedwine.com.

I think that leaves two shipments outstanding, which I expect to see next week.

Speaking of yesterday, it turns out that though pickleball is on the schedule at the Champions Fitness Club in Waterville on Tuesdays and Thursdays, attendance is sporadic.  I went in yesterday, hoping for a game, waited around for half-an-hour, nobody showed, so I left to do errands.  Sigh.  Next opportunity to sport the pickle — Wednesday morning.

I did learn yesterday that, if I decide to make enough of a habit of pickleball that I’ll want my own equipment, I will not want a wooden paddle.  The paddle I was loaned last Wednesday was aluminum, I suppose, and it was like an extension of my hand; I hardly knew I was holding a paddle.  The wooden Club paddles weigh a ton, and I can see it wearing my wrist out inside of a (short) game.

Hmm.  I wonder if I can play left-handed, anymore.  Over the years since the nuns changed my handedness, I’ve become more and more right-hand-oriented.  Something to experiment with, I guess.

After supper yesterday, Steve and I drove out to Skowhegan, on purpose to visit the New Balance Factory Store, Steve being in the way of wanting a pair of tennis shoes — about which more in a moment.  I did not intend to buy tennis shoes, myself, but a pair of blue cross-trainers with orange laces called my name and I did not resist long.  I’m wearing them right now, and myghod, they weigh nothing.  Maybe I’ll be able to fly again, like when I was a kid in the first new sneakers of summer.

But!  We were speaking of tennis shoes.

I asked the young lady on the floor at New Balance for “tennis shoes,” and she obligingly showed me the tennis shoes on offer, helpfully pointing out the pivot point on the sole.  Because “tennis shoe” is a technical term.

I chewed my lip for a minute, and then said.

“Back in the dark ages, we called all the kid’s casual canvas shoes tennis shoes.  Nobody really played tennis in them.  There’s another word — sneakers?  Soft shoes that are not created for a single task, but that you can walk and play games in?  I’m looking for sneakers.”

On the one hand, good on her for being patient and guiding me to what I really wanted.  On the other hand, I feel like I’m needing to give a history lesson every time I want to buy something, lately.  Anybody else having this. . .experience, or am I just hopelessly behind the curve?

And! For those who Await, a photo of — no, not the new sneakers — Princess Sprite and Trooper, doing the taxes. 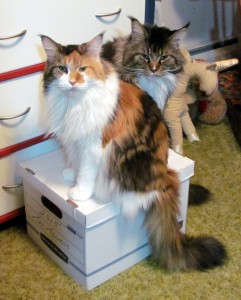 10 thoughts on “Adventures in coon cats”