Well…Steve and I had tickets for the 4:00 Viewing of the Lights at the Coastal Maine Botanical Gardens in Boothbay, Maine.  However, being the grasshoppers that we are, and prompted by the fact that we have never Properly Done the Boothbay region, we decided to Make a Day of It.

So! after a leisurely breakfast at home, we set off in Kineo the Wonder Subaru, out Route 27 to Augusta, arriving finally in Boothbay Harbor, where we drove about the village before stopping at Eventide, which promised us fresh bread and wondrous other goodies.  We had a lovely time talking about purple hair with the mother of the baker, who was helping out, who had been the owner of a beauty salon, and who was very interested in how I had achieved such a “natural” color.  Then I talked bread with the baker, and Steve bought vinegar and oil, and I bought peach butter, and apple butter, and pumpkin butter, and — oh! — some crackers, and. . .I’m sure there was something else.  Really, we shouldn’t be allowed in stores, unsupervised.

In addition to all the Retail Excitement, we saw, but were not introduced to, Schooner, who had come to visit his good friends at Eventide — Schooner being a not-quite-full-grown St. Bernard, with excellent manners.

After pillaging Eventide, we went across the street to Enchantments Metaphysical Gallery, which is three stories of. . .the most incredible mishmash of new age, Wiccan, fantasy, world religion, cosplay. . .STUFF I have seen in a lifetime of touring head shops, Wiccan and New Age enterprises.  You could spend a day in the tarot section alone.  There were Buddhist prayer flags, Thai fairy houses, beaded curtains, witch balls, sparkly unicorn sculptures, hookahs, and Cards Against Humanity.  There were Grateful Dead t-shirts and Renfaire clothing, Genuine Thousand Year Old Turkey Carpets(tm), and crystals, crystal balls — one as big as my head — and jewelry, and windchimes, and — ohmighod, I had such a good time!  Steve found some CDs suitable to meditate to; we contemplated, but did not purchase, a bag of Wake the F*ck Up extra strong coffee — oh, and they had incense.

We smelled of incense for hours, even after taking a drive along the ocean with the windows down, which we did after leaving the shop, following the scarily thin road along the rocky, rocky shore, pushing our explorations further afield, over to East Boothbay, and the other side of Linekin Bay, before returning to Boothbay Harbor in search of lunch, which we hunted and gathered at the Boathouse Bistro.  Steve had what looked to be an Epic grilled cheese, bacon and tomato on sourdough, and I had a half-portion of the chef’s risotto of the day (note to self: learn how to make risotto, why not?).  The food was good, the company easy — mostly townfolk taking a break from shopping and such.

After lunch, we took a little walking tour of downtown, then motored on out to the Gardens around 3:30.  We figured we’d be Super Early. Silly us.  And now we know why they sell tickets in advance (which I had been prone to complain about, before I understood how popular the Gardens Aglow event is).  We were directed through three parking areas to an Unimproved Zone high up on the hill, then walked down into the garden proper.

I had also been a little miffed that the only tickets we could get had been for the 4 pm Viewing.  I’d wanted to see the lights in Full Darkness.

Boy, am I glad we had the early tickets.  Mind you, by the standards of a December evening in Maine, it wasn’t cold; a balmy 28F/-2C, damp, as one expects with the Atlantic Ocean just over the hill.  We were dressed warmly — for me, long-sleeved turtleneck under long-sleeved shirt, then fleece sweater, winter jacket, heavy gloves and fleece-lined hat with ear-flaps; ski socks, and sturdy shoes. Steve was similarly attired.

But, as the sun went down, so did the temps, and the wind came up.  We failed to find the kiosk that was selling hot cocoa (because it was inside of a building, not in the gardens), but despite that — boy! it was fun.  Beautiful, gaudy, crowded with people who were in a mood to be pleased, and the passing remarks all on the subject of, “Oh, look over there!  Isn’t that–”

I’m so very glad we went, and I’m already making plans to buy us a membership for the Gardens, so Steve and I can visit in more clement weather — and so we can go the festival of lights again, next year.

I took a ton of pictures, though far fewer than that turned out.  The camera was having some conflicts at the beginning, not being sure which light it should pay most attention to.  Later, after it got dark, things clarified, but by then I was really reluctant to take my gloves off for safe camera handling.

This one ALMOST turned out, surprise! The thing in front of the tree is a sculpture that moves and flutters in the breeze, and looks like a flight of birds. 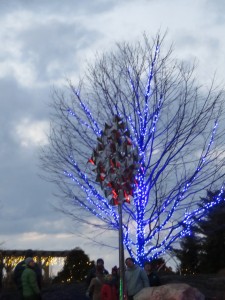 I adored the cat fence, and now I want one — maybe around the cat garden?  Hmmmm. 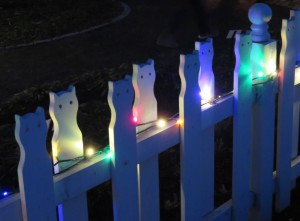 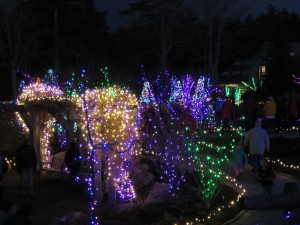 7 thoughts on “What I did on my day off”