Well. . .nuts.  I thought I had plenty of manila folders, but it turns out that I have. . .three.  Not quite enough to make the 2016 files, and we’d been — aggressive in getting rid of empty, old folders, back earlier in the year when we thought we’d be shifting house.

I zapped over to Staples to order a box (or two) of folders, only to find that Staples was being Entirely Bitchy about shipping “add on” items (manila folders are “add on” items, because apparently no one ever wants them for themselves.  Who knew?), which meant, in order to get the damned things shipped to me, I had to add on other “add on” items, notably an envelope sealing stick — which was OK, the cats helped with the Yule card mailing by eating the rubber tip off of the stick we had — and also some #10 envelopes, to make weight.

Ah, well.  Package to be delivered tomorrow, so I’ll change out the working files then, moving the 2015 files to a banker’s box which will reside in a corner of my office until the taxes are done, and then move downstairs, to join all the rest of the banker’s boxes full of previous years’ taxes.

I’ve already made the 2016 expense spreadsheets and whatnot — go, me.

Moving on to Other Matters, look what came in the mail today! 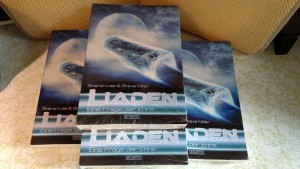 Also!  Remember to Watch the Skies, or, more precisely — Watch Welcome to Liad, where Steve and I will be posting a end-of-year goody for y’all on December 24.

Oh!  Speaking of office supplies, revenge and all:  Watch the Sticky Note Experiments. Brought to you by Eepybird, based in our own Buckfield, Maine.  Thanks, guys!

2 thoughts on “Revenge of the Office Supplies”