This morning I write to you replete with a breakfast of Steve’s wonderful French toast dressed with dark maple syrup, a side of bacon, and several cups of coffee.  On the schedule today is finishing the laundry, changing the bedclothes, and, of course, working on The Gathering Edge.  Steve and I were brainstorming some ideas last night, and over breakfast, and we’ve got direction and energy.  I have a couple of scenes to write and braid in early on the backbone, so that’s what I’ll be concentrating on today.  Steve, who was lead writer on the story we handed in last week, is now coming back to the book and will be building us some more backbone.

Sounds like we know what we’re doing, doesn’t it?

Honestly, in broad measure, we do know what we’re doing, having done it so often.  On the other hand, there is the truism — every book is different.  Every book is different, even books written in a long series, or set within a created universe, or books with continuing characters.  After all, if the author’s doing it right, the characters will be growing, the universe will be evolving, and the author will be bringing their own new experiences, growth, and insights to the work.

Which brings me to yesterday’s tweet from James S.A. Corey:  Series writers: Be aware that some people will be angry you aren’t writing the same book over and over again. Ignore them.

. . .which both reflects my experience and is sound advice.  I’ll add that series writers also need to learn to  ignore the people who perhaps have not read their work, but see many novels written in the same universe, and therefore know that the author is simply writing the same book over and over and over again, and are therefore dismissible as artists and, occasionally, as human beings.

Which brings me to my next link in this Sunday Salad:  an article in the New York Review of Books by Tim Parks, in which he makes the argument that the only writers who can afford to experiment with, or grow, their art are those who are already known to be important/bestsellers (there’s a reason for that slash, there — read the article).  Midlist folks, argues Parks, are required by the field to play it safe, and produce the same old, same old, because one mistake — one “failed” book — can mean the end of  a career, whereas the guys at the top get unlimited Get Out of Jail Free cards.  Here’s your link.

To an extent, I disagree with Parks’ argument; I think that the act of writing is a risk of itself.  However, I do realize that, for career novelists, putting food on the table means that the book has got to earn out, and that the next one is under contract — which produces some constraints.

OTOH, we’ve been writing in a universe of our own devising for darn near 30 years, and taken what risks we wished.  We’re certainly not at the top of the Literary Ladder, but it may be that our continued ability to write what we want stems from the fact that we found our audience, that it is sufficiently large to give us a buffer against the necessity to always write it safe.  Or, yanno, our imaginations could be so limited that even our daring stuff is considered the same old, same old.

Lastly — a local film critic and commentator has recently published his first book, and he describes his experience here.

. . .and that’s what I’ve got today, if I’m going to do the laundry, and write those pages.

Somebody please remind me that I need to do a post about my advice for growing one’s audience in This Digital Age, if I don’t get to it in the next day or two.

I hope everybody has a pleasant and relaxing Sunday.

I think Sprite’s outgrowing her basket: 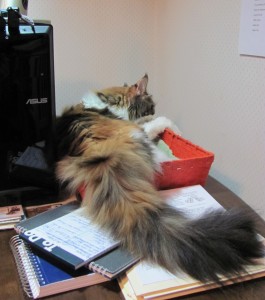 9 thoughts on “So you want to be a writer”